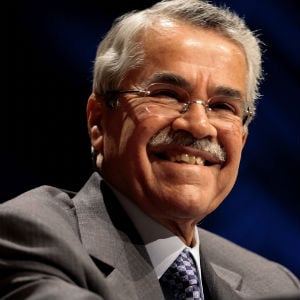 Saudi Arabia can meet any future world oil shortages thanks to massive investment, and its rising gas output will mean crude exports will not be affected by booming domestic energy demand, Oil Minister Ali al-Naimi said on Monday.

Growing tension between Iran and the West over the former’s nuclear programme has led to fears of a disruption in oil supplies from the Gulf.

The US and European Union have raised pressure on Iran with sanctions and a ban on Iranian oil, while Tehran has said it may cut off supplies to some unspecified countries.
Saudi Arabia is best placed to make up for any shortfall in oil supply.

“I would like to state for the record, here in London, that the kingdom will continue to be a reliable, steady and dependable supplier of energy to the world,” Naimi told an oil conference.

He dismissed concerns that demand from within Saudi Arabia would limit the amount of oil available for export. “Saudi Arabia’s domestic growth will not impact on exports now or in the future – of this I am very confident,” he said.

The world’s top crude exporter is already burning more than 10 per cent of its output in power plants on hot summer days, and fuel subsidies are exacerbating a demand boom that is increasing consumption of the world’s largest oil reserves.

Official data shows Saudi oil consumption rose by more than five per cent a year between 2003 and 2010 to an average of 2.4 million barrels per day (bpd) in 2010. That’s a significant chunk of total Saudi oil output, which averaged around 9.7 million bpd in December, a Reuters’ survey showed.

“Warnings last year about what would happen to Saudi oil exports if current levels of domestic usage were left unchecked were taken as fact,” Naimi said “But we are not leaving domestic energy consumption unchecked.”
Naimi said the kingdom would be able to meet any future oil market shortages because of its high levels of investment to maintain oil production capacity.

Naimi said earlier this month Saudi Arabia could increase oil output by about two million bpd “almost immediately” from its current levels just under 10 million bpd. He said the kingdom could add a further 700,000 bpd, with about 90 days to reach full capacity of 12.5 million bpd.

“In 2009 the kingdom completed a massive programme to increase oil production capacity,” Naimi said. “This investment and effort is aimed at retaining our position as number one supplier of oil to the world, and the investment continues.”

He said the kingdom had proven gas reserves of 286 trillion cubic feet, the fourth largest in the world.

“Saudi Arabia is going through a period of rapid and extraordinary economic growth,” Naimi said. “It has a young and fast growing population and a GDP growth rate currently around seven per cent. Industrialisation is increasing and we are witnessing an unprecedented expansion in the country’s infrastructure – so it is true that the kingdom’s domestic energy demands are rising to keep pace.”

“It is not supply that will be a problem in the near future, it is demand,” Naimi said. He said Europe faced “a difficult time” and it was clear its economic readjustment would result in falling demand for goods and services. This, in turn, would impact on oil demand and imports.

“But the world does not begin and end in Europe.” Naimi said. “Going forward, I see the potential for real prosperity and growth throughout the Middle East, in Asia, South America and Africa.”