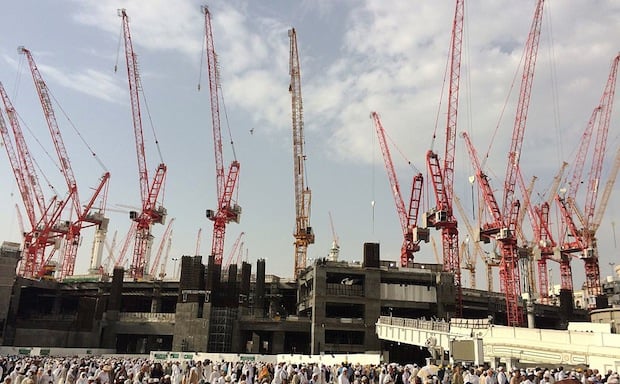 Saudi Binladin Group (SBG) is negotiating with banks an extension of up to two years on a 10 billion riyal ($2.7 billion) Islamic credit facility used to pay for building work at the kingdom’s Grand Mosque in Mecca after delays to the project, banking sources said.

Contractors in Saudi Arabia have had to deal with delays to projects and late payment after the government trimmed spending to adjust to the impact of lower oil prices.

Banking sources said SBG had asked for an extension until the end of 2019 for the syndicated facility, used as working capital to fund the expansion of the Grand Mosque, which houses the Kaaba, which Muslims face towards when praying.

The sources said the project had been delayed to allow the government to defer some of its spending plans, as well as because of changes to the project’s scope and to some of its contractors.

Saudi Binladin Group and the Ministry of Finance were not immediately available for comment.

They said the facility being negotiated could have an early settlement clause, meaning SBG would repay creditors before the end of 2019 if the government settled its dues before then.

Mecca’s mayor Osama bin Fadl Al-Bar told Reuters in September that the expansion of the Grand Mosque would be completed in either 2017 or 2018.

But banking sources told Reuters the timeline for the mosque had now been delayed.

The office of Al-Bar was not immediately available for comment.

Saudi authorities have begun a number of major construction projects to accommodate the increasing numbers of people making the pilgrimage to Mecca.

SBG is working on a significant number of those schemes, even after state spending cuts, economic reforms and its temporary suspension from new state contracts after a crane accident killed 107 people at the Grand Mosque in 2015.

SBG’s latest talks with creditors follow earlier requests by the construction group for more time to repay part of the facility, a SAR817m Islamic loan.

Dubai Islamic Bank was the lead bank on the SAR10bn facility, with the other banks mainly United Arab Emirates-based including Emirates NBD and Noor Bank, the sources said, with one adding that Ajman Bank, Union National Bank and Mashreq were also involved.

The sources also said most of the banks had agreed to the extension and that the paperwork would be signed in due course.

SBG had received some of the backlog of payment owed to it by the government in recent months, but a large portion remained outstanding, the sources said.