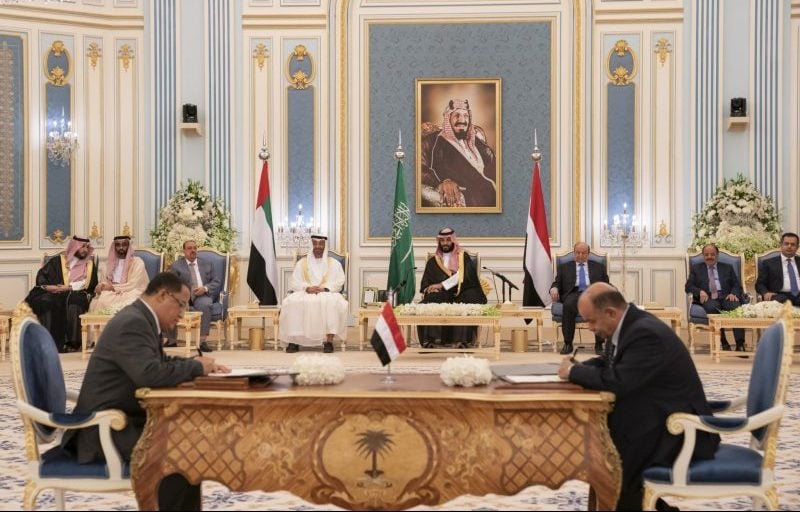 Yemen’s internationally recognised government and southern separatists struck a peace deal in Saudi Arabia on Tuesday, formally ending a rift that had threatened their joint efforts to counter Iran-backed rebels in control of the capital.

The agreement was signed in Riyadh between the secessionist Southern Transitional Council and the Yemeni administration of President Abd Rabbuh Mansur Hadi.

“Our goal is to support the Yemeni people and face foreign interference in their internal affairs,” Saudi Crown Prince Mohammed Bin Salman said at the event, adding that the pact could potentially pave the way to ending conflict in Yemen.

Under the deal, the Yemeni Prime Minister is scheduled to return to the southern city of Aden in a week, with a new 24-member cabinet open to all parties, including the STC, to be chosen within 30 days, Mohammed Al Jaber, the Saudi ambassador to Yemen, said in a briefing with reporters.

The separatists’ armed forces are expected to be placed under the control of the Yemeni administration.

The two factions, who have been supported by a Saudi-led military coalition in their four-year conflict with the Shiite Houthi rebels, began fighting each other in southern Yemen earlier this year. That risked a permanent fracture in their alliance with the potential to prolong the overall war.

“If successful, the agreement solves two short-term problems,” Peter Salisbury, a senior Yemen analyst at the International Crisis Group, said earlier on Twitter. As well as halting the emergence of a war within a war, the pact gives “more credibility to future government negotiating” with the Houthis.

However it also “displays many of the hallmarks of past troubled political deals in Yemen” that could lead to its collapse, he said.

United Nations envoy to Yemen Martin Griffiths said the accord was “an important step for our collective efforts to advance a peaceful settlement to the conflict in Yemen.”

Saudi ambassador Al Jaber said the kingdom hoped the agreement “will send a strong message to the Houthis.”

The U.S. has now begun efforts to find a negotiated settlement to the Houthi conflict, which has triggered the world’s worst humanitarian crisis with tens of thousands killed and millions left hungry and displaced.

In September, devastating attacks on Saudi oil infrastructure highlighted the danger the Yemen conflict poses to regional stability. The strikes were claimed by the Houthis but Saudi officials and observers saw the hand of Iran, which is pushing back against a U.S.-led economic offensive to weaken the Islamic Republic.