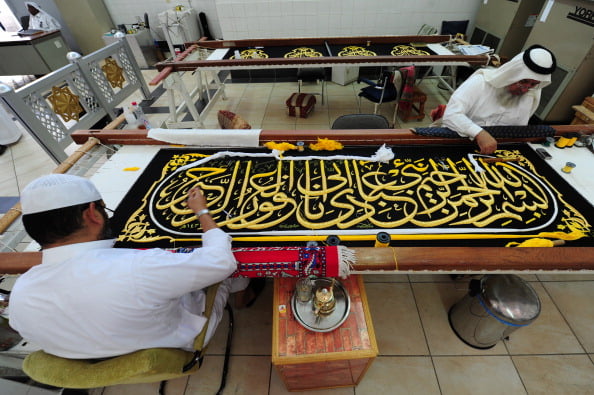 More than 200 men have been labouring in a Saudi factory for eight months to produce the gold-embroidered, black-dyed Kiswa, a silk cover for the square building called the Kaaba that is a focal point of the annual haj pilgrimage to Mecca.

The ornate protective covering produced at the Mecca factory will be draped over the Kaaba at the start of the haj, which this year is expected to begin on October 14.

Muslims associate the Kaaba with the prophet Ibrahim, the Biblical Abraham, who is viewed by Muslims as the founder of a pure monotheism which slowly declined until revived in the 7th century by Mohammed, the prophet of Islam.

The stitching of Islamic calligraphy in gold threads onto the silk is a skill that has been passed on from generation to generation, said Hussanian al-Sharif, head of the embroidery department who has worked at the factory for 37 years.

“No one outside this factory knows how to do the embroidery that we do, so that’s why our old workers have to train the newcomers for a three-month period before they start,” he said.

At the haj’s end, the Kiswa, produced at a cost of $6 million provided by the Saudi authorities, will be cut into pieces to be distributed to dignitaries and religious organisations. Recipients regard the fragments as heirlooms.

Nearly all of the 210 workers come from the city of Mecca and most of them have worked there all their lives.

Before the factory was opened in 1927, the 47 pieces of cloth cover were manufactured in Egypt and materials were bought from Sudan, India, Egypt and Iraq.

“The silk is dyed black here and we spin it ourselves to make the material, then it is hand-embroidered with 120 kg of pure gold and silver,” he told Reuters in an interview.

Machines to help automate the process were introduced 25 years ago, said Salman al-Loukmani, head of the materials department.

“Before we used to have a lot more workers and it was a very long process to make the material by hand. Now we have a number of Swiss spinning machines that help us,” he said.

Poorer pilgrims sometimes tear parts of the cover during the haj to take home, but the factory is ready for that too.

“One of the main challenges for the Kiswa factory is the pilgrims who tear pieces of the cover with their hands or other sharp objects, so every hour we have a maintenance team to repair the damage,” Bajouda said.