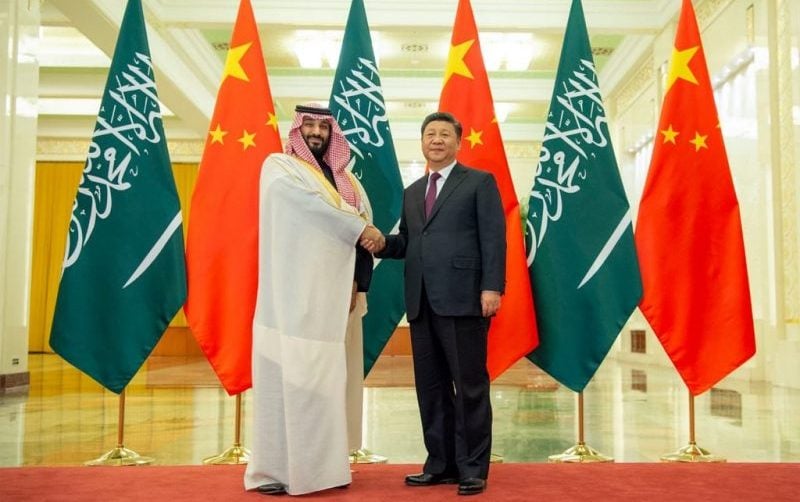 The Saudi delegation, including top executives from state-owned oil company Saudi Aramco, arrived on Thursday on an Asia tour that has already seen the kingdom pledge investment of $20bn in Pakistan and seek to make additional investments in India’s refining industry.

“China is a good friend and partner to Saudi Arabia,” President Xi Jinping told the crown prince in front of reporters.

“The special nature of our bilateral relationship reflects the efforts you have made,” added Xi, who has made stepping up China’s presence in the Middle East a key foreign policy objective, despite its traditional low-key role there.

The crown prince said Saudi Arabia’s relations with China dated back “a very long time in the past”.

“In the hundreds, even thousands, of years, the interactions between the sides have been friendly. Over such a long period of exchanges with China, we have never experienced any problems with China,” he said.

Crown Prince Mohammed, who has come under fire in the West following the murder of Saudi journalist Jamal Khashoggi at the kingdom’s Istanbul consulate in October, said Saudi Arabia saw great opportunities with China.

“The Silk Road initiative and China’s strategic orientation are very much in line with the kingdom’s Vision 2030,” he said according to SPA, referring to Saudi Arabia’s sweeping economic reform programme.

Trade between the countries increased by 32 per cent last year, he said. Saudi Arabia also said it was working to add Chinese to the curriculum in Saudi schools and universities.

“The introduction of Chinese to the curriculum is an important step towards the opening of new horizons for students,” the government said in a statement.

China has had to step carefully in relations with Riyadh, since Beijing also has close ties with Saudi Arabia’s regional foe, Iran.

China is also wary of criticism from Muslim countries about its camps in the heavily Muslim far western region of Xinjiang, which the government says are for de-radicalisation purposes and rights groups call internment camps.

Saudi Arabia respected and supported China’s right to protect its own security and take counter-terror and de-radicalisation steps, the crown prince told Xi, according to the same report, and was willing to increase cooperation.

Chinese state media made no direct mention of Xinjiang in their stories on the crown prince’s meetings.

Aramco agreed to form a joint venture with Chinese defence conglomerate Norinco to develop a refining and petrochemical complex in the northeastern Chinese city of Panjin, saying the project was worth more than $10bn.

The partners would form a company called Huajin Aramco Petrochemical Co as part of a project that would include a 300,000-barrels per day (bpd) refinery with a 1.5-million-metric tonnes per year ethylene cracker, Aramco said.

Aramco will supply up to 70 per cent of the crude feedstock for the complex, which is expected to start operations in 2024.

The investments could help Saudi Arabia regain its place as the top oil exporter to China, a position Russia has held for the last three years. Saudi Aramco is set to boost market share by signing supply deals with non-state Chinese refiners.

Aramco also signed an agreement to buy a 9 per cent stake in Zhejiang Petrochemical, Saudi state news agency SPA said. This formalised a previously announced plan to gain a stake in a 400,000-bpd refinery and petrochemicals complex in Zhoushan, south of Shanghai.

But China was not seeking to play politics in the Middle East, the widely read state-run tabloid, the Global Times, said in an editorial.

“China won’t be a geopolitical player in the Middle East. It has no enemies and can cooperate with all countries in the region,” said the paper, published by the ruling Communist Party’s official People’s Daily.