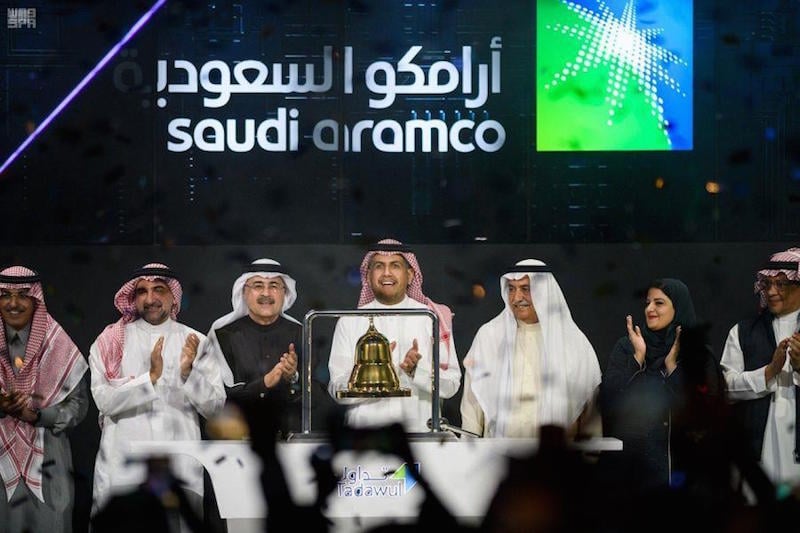 Saudi Aramco’s market value after one day of trading is closing in on the $2 trillion market value sought by the kingdom’s de facto leader, despite skepticism from international investors.

The oil producer’s capitalisation jumped from $1.71 trillion in its initial public offering to $1.88 trillion at the end of the first trading session on Wednesday in Riyadh. The stock finished at 35.20 riyals, rising the 10 per cent limit allowed by the Saudi bourse, in the world’s biggest IPO.

A gain of less than 7 per cent on Thursday would lift Aramco to $2 trillion, the target that Crown Prince Mohammed Bin Salman first mentioned almost four years ago, when he shocked markets with his plan to float his country’s crown jewel. The final decision to sell just 1.5 per cent of the company at a lower price came after a tumultuous period that included the murder of government critic Jamal Khashoggi and the imprisonment of prominent Saudis in Riyadh’s Ritz Carlton.

Foreign investors largely spurned the offering in part because the stock was too expensive, and it only looks more pricey now relative to dividends and cash flow, said Salih Yilmaz, a Bloomberg Intelligence analyst.

The stock’s surge “will be seen as a victory for Saudi Arabia,” Yilmaz said. “The implied 3.9 per cent dividend yield and 4.3 per cent free cash flow yield is, however, much lower than global peers and indicates it will trade at a significant premium.”

Fair Value
If the stock keeps climbing on Thursday that gap will widen, making a potential international listing harder. Many foreign managers who refrained from buying the shares also cited corporate governance concerns and threats to the company’s facilities after attacks this year.

Still, the debut was cheered by Saudi and Gulf investors, who see the stock price supported by Aramco’s guaranteed dividends, buying by index-tracking funds and the fact that the region doesn’t have any other listed major oil companies.

Aramco’s “$2 trillion valuation is justified due to secured dividend streams,” Arqaam Capital analysts including Rita Guindy and Jaap Meijer wrote in a report on Wednesday in which they initiated coverage with a buy recommendation and price target of 39.20 riyals. They expect a gradual increase of 2 per cent annually in the dividend, potentially being topped up by a special payout of $20bn in the next three years.