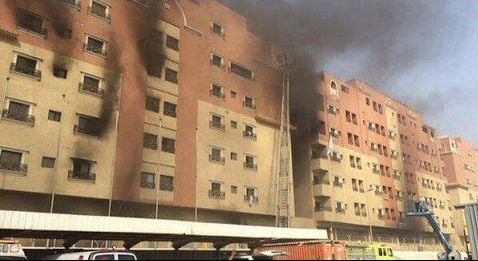 A fire that gutted one of Saudi Aramco’s residential complexes in Al Khobar this week was caused by an electrical short circuit, civil defence officials said.

According to a report by local newspaper Arab News quoting results from a preliminary probe, the short circuit happened in the basement of the complex and spread to other parts. It also burned out 35 vehicles in the vicinity.

The blaze killed 10 people and injured 259. Three Canadians of Asian origin, a Pakistani citizen and a Nigerian woman were among those who were killed.

Around 179 people who were injured in the fire have been discharged from hospital while 80 still remain. Witnesses say that the fire burned for almost six hours, while 39 fire fighting teams and 20 rescue teams tried to put it out.

Initial reports drawn from video cameras installed in the building said that the fire had originated from an electrical surge in a transformer located in the basement.

According to Aramco’s website, the Radium Residential Complex consists of eight six-storey buildings and comprises 486 units. It is located some distance from Aramco’s oil and gas facilities.

Aramco, which has more than 61,000 employees, runs several such private gated communities across the kingdom.