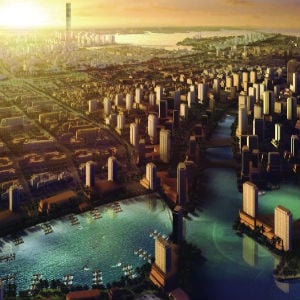 Whatever happened to Saudi Arabia’s New Economic Cities? Touted last decade as a panacea for a new wave of growth to support the social fabric of the Kingdom in neglected areas of the country, little work seems to be taking place six years after the first metropolis, King Abdullah Economic City (KAEC), at Rabigh, was announced in December 2005.

It is not that there is no sign of activity, but that the vision that saw the cities as central to opening up Saudi Arabia’s economy seems to have dissipated. In 2006, officials at the Saudi Arabian General Investment Authority (Sagia) spoke of six new economic cities; now it seems that only four, including KAEC, Knowledge Economic City (KEC) in Medina, Jizan Economic City (JEC) and Prince Abdulaziz Bin Mousaed Economic City (PA BMEC) at Ha’il, are planned.

“The vision is… fantastic,” says Ahmed Al Khateeb, CEO of Jadwa Investment, a Riyadh-based investment bank. “Saudi Arabia is centrally located between east and west, surrounded by sea, and I think the location is just great for this concept.”

Crucially, the cities going ahead are all on or adjacent to the Kingdom’s oil-poor western and central regions. Compared to the heavy-industrial and petrochemicals focus of Jubail and Yanbu, the new cities will have a greater emphasis on services, as well as on less specialised job opportunities for the growing ranks of young Saudis seeking work.

KAEC is the most advanced, and is to comprise six sectors: an industrial zone, a port, a central business district, an educational area, residential and resorts. Work is underway on the port, with Worley Parsons having carried out the initial planning for phase one capacity of 3.8 million TEU a year, a figure set to increase to six million TEU a year in phase two.

Pfizer have announced they plan to build a pharmaceutical manufacturing plant, Al Rajhi Steel is moving ahead with a steel plant while Emaar The Economic City, an affiliate of Dubai-based property developer Emaar, last month received a SR5 billion loan from the Saudi Finance Ministry for phase two construction at KAEC. Emaar The Economic City, the property developer at KAEC, is a joint venture between Sagia and Dubai’s Emaar Properties.

At Jizan, planners envisage primary industries in metals and petrochemicals acting as feeders to downstream industries, as well as commercial and residential facilities and utilities. At Medina, KEC is to be a centre for tourism and real estate development. PA BMEC will focus on agribusiness, commerce and industry, logistics, petrochemicals, and tourism. A Sagia document lists over 300 projects seeking investment.

Officials at Emaar The Economic City were forced to admit last year that KAEC would undergo a change of focus to affordable housing after a lack of demand for upscale units. The UAE’s The National newspaper said some 15 per cent of homebuyers had defaulted on contracts and several tower projects had been delayed.

“[The Kingdom] has a young population, a labour force and materials for manufacturing, power and energy,” says Mr. Al Khateeb. “The economic face several immediate financing challenges, but they will definitely overcome them in the near future.”