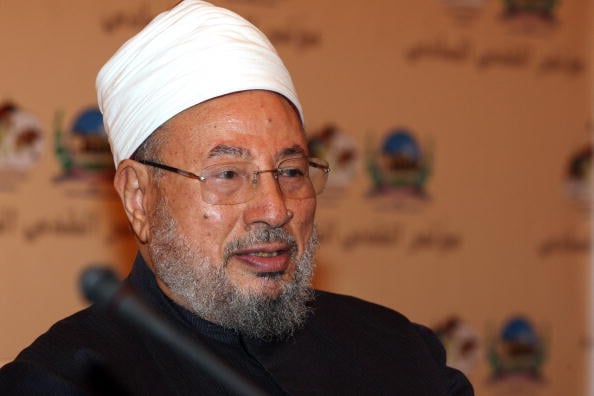 The spiritual leader of the Muslim Brotherhood attended a ceremony organised by Saudi Arabia in Qatar on Friday, signalling an easing of Riyadh’s hostility towards the Islamist movement.

Sheikh Youssef al-Qaradawi, a Qatar-based cleric whose fiery sermons have strained ties with Gulf neighbours, appeared alongside the Qatari prime minister and the Saudi ambassador at an event in Doha to celebrate Saudi Arabia’s national day.

The accession to the Saudi throne in January of King Salman, who is more sympathetic to religious conservatives than his predecessor King Abdullah, caused glimmers of hope among Muslim Brotherhood exiles in Qatar that the Middle East’s political winds had started to shift in their favour, potentially giving the Islamist group more space to act.

Salman, while stopping short of befriending the Brotherhood, has worked to reduce tensions with the movement’s own allies, strengthening Riyadh’s ties with Turkey and Qatar and reaching out to Islah, the Islamist group’s offshoot in Yemen.

“We are optimistic now,” said an Egyptian Brotherhood member living in Qatar who declined to be named.

“The new (Saudi) leadership could mean a new era for the Middle East, where Islamists are worked with and seen as partners rather than demonised.”

Qaradawi, who was born in Egypt, has often in his sermons admonished the authorities in Saudi Arabia and the United Arab Emirates, who see the Brotherhood as an insidious threat to regional stability through its activities in Egypt and other Arab countries.

In May an Egyptian court sentenced Qaradawi to death in absentia in a case relating to a mass jail break in 2011.

Arguments over the Brotherhood, the most influential Islamist group in the world, were at the heart of a rift among Gulf Arab states that in 2014 saw Saudi Arabia, the UAE and Bahrain pull their ambassadors from Doha.

They only returned after Qatar said it would not allow itself to be used by the Brotherhood for its activities.