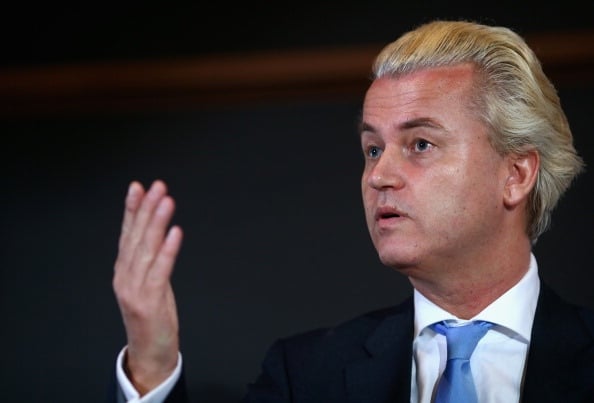 Saudi Arabia is considering trade sanctions against the Netherlands because of stickers printed by far-right politician Geert Wilders which display anti-Islam slogans in the colours of the Saudi flag, a Dutch foreign ministry spokesman said.

Wilders, leader of the anti-immigration Dutch Freedom Party, is tied in first place with the Democrats in national opinion polls before European Parliament elections that will be held in the Netherlands on Thursday.

His virulent anti-Islam statements have angered many and Wilders has lived under round-the-clock armed guard since he received death threats in 2004.

“We have indications that Saudi Arabia is considering measures because of the insults to its flag and religion by Geert Wilders,” Foreign Ministry spokesman Friso Wijnen said.

Wijnen could not say what these indications are, but that the Dutch government is seeking contact with Riyadh. The stickers were first printed in December.

“The Cabinet strongly distanced itself from the insults Wilders first made to the Saudi flag and the religion in December,” Wijnen said. “It still does now.”

Saudi government officials could not immediately be reached for comment by Reuters. The Saudi Chamber of Commerce was also not available.

However, Saudi newspaper al-Eqtisadiah reported on Friday that a directive would be circulated to all relevant authorities to exclude Dutch businesses from future projects and halt visits because of the anti-Islam statements, citing unnamed sources.

Wilders’ stickers, which are in green and white like the Saudi flag, carry derogatory comments about Islam, the Prophet Mohammad and the Koran.

Bilateral trade between the countries was nearly $5 billion in 2010 and the Netherlands is one of the largest investors in Saudi Arabia, making up nearly four per cent of foreign direct investment that year, the Dutch government said.

In addition to trade in oil and gas, the Netherlands exports a wide range of products and technology in the agriculture, machinery, chemical and petrochemical sectors in Saudi Arabia.

Wilders, in reaction to possible trade measures by Saudi Arabia, said in a statement that the Netherlands “should have boycotted that country a long time ago.”