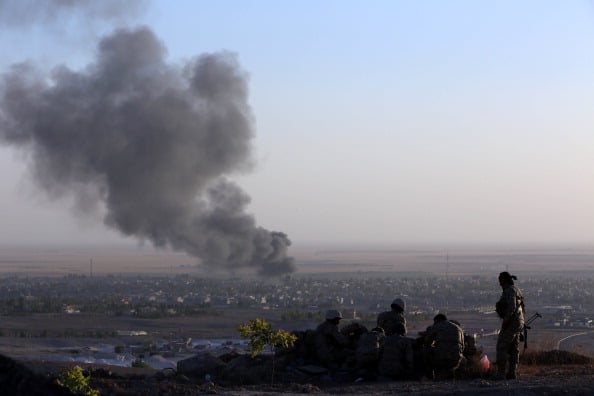 Saudi Arabia and Kuwait agreed to comply with a United Nations resolution aimed at stopping financing for Islamist militant groups in Syria and Iraq after four of their nationals were named among a group blacklisted by the international body.

The UN Security Council unanimously adopted a resolution on Friday intended to weaken the Islamic State – an al Qaeda splinter group that has seized swaths of territory in Iraq and Syria and declared a caliphate – and al Qaeda’s Syrian wing, Nusra Front.

Western officials believe that wealthy Gulf Arabs, in countries that include Saudi Arabia and Kuwait, have been a main source of funding for Sunni Islamist militants fighting against Syrian President Bashar al-Assad.

While Sunni Muslim Saudi Arabia is a main backer of the rebellion against Assad, a member of the Alawite sect of Shi’a Islam and an ally of Riyadh’s rival Shi’ite Iran, it says it is careful to direct state support to moderate groups.

Riyadh this year declared the Islamic State group and the Nusra Front terrorist organisations, imposing prison terms for giving them moral or material support, and has mobilised its clerics to preach against private donations to militants.

The Islamic State has long been blacklisted by the Security Council, while Nusra Front was added earlier this year. Both groups are designated under the U.N. al Qaeda sanctions regime.

Gulf media said that two of the blacklisted men were Saudis wanted by Riyadh for links to Islamist militants, while two others were Kuwaitis, including Sheikh Hajjaj Bin Fahd Al Ajmi, a prominent cleric accused of links to Syria’s al Qaeda branch, the Nusra Front.

“Kuwait will abide by the UN Resolution 2170 and implement all its terms,” Kuwait’s UN ambassador Mansour Ayyad Al-Otaibi said in a statement carried by state news agency KUNA on Saturday.

Under Friday’s resolution, the six people will be subject to an international travel ban, asset freeze and arms embargo. It asks U.N. experts – charged with monitoring violations of the council’s al Qaeda sanctions regime – to report in 90 days on the threat posed by Islamic State and Nusra Front, and on details of their recruitment and funding.

The London-based Asharq al-Awsat said the two Saudis, Abdul Mohsen Abdallah Ibrahim al-Charekh and Abdelrahman Mouhamad Zafir al Jahani, were on two lists of wanted militants issued in 2009 and in 2011.

The Syrian Observatory for Human Rights, which monitors casualties in fighting in Syria, has said that Charekh was killed near the Syrian coastal city of Latakia in March. Jahani was believed to be at large somewhere outside Saudi Arabia.

Saudi Arabia’s ambassador to the United Nations, Abdullah al-Mualami, also said Riyadh was “committed to implementation” of the resolution.

Both Saudi Arabia and Kuwait have recently tightened laws aimed at preventing citizens from involvement in foreign conflicts and instructed mosque preachers to abide by government policies during their sermons.

The Kuwaiti government last month ordered non-governmental public welfare associations to refrain from involvement in politics and shut down branches of some associations.

Kuwait’s justice and Islamic affairs minister resigned in May after a senior U.S. official said he had called for jihad in Syria and promoted the funding of terrorism.

In Saudi Arabia, Muslim Sharia courts have issued a series of verdicts jailing people for going to fight abroad or collecting funds for Islamist militants.