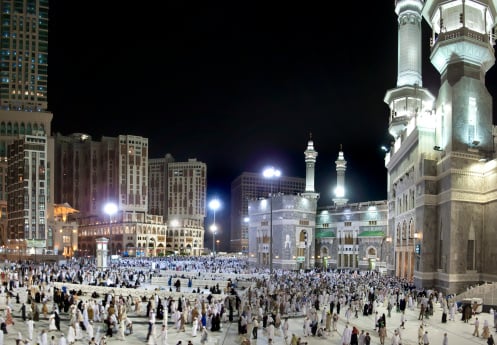 Saudi Arabia’s Ministry of Health will not issue Umrah and Haj visas to pilgrims from Sierra Leone, Guinea and Liberia due to concerns regarding the spread of the Ebola virus, a ministry spokesperson said.

The Kingdom, which has been battling a MERS outbreak, also beefed up precautionary measures at airport terminals to ensure public safety, a senior official was quoted as saying in Saudi Gazette.

“We have communicated the instructions to the officials at all ports of entry,” said Khalid Marghalani, MOH spokesman.

“We have trained our personnel on how to identify and deal with Ebola cases and control virus infection, should it happen.”

There are no direct flights from the three West African countries to the Kingdom except during the Haj season, an official added.

Although the World Health Organisation has not recommended any travel restrictions or border closures due to the Ebola outbreak, many major airlines and airports have begun to rigourously screen passengers from West Africa.

The Ebola outbreak, which began in Guinea in February later spread to other West African nations of Sierra Leone and Liberia, and has killed more than 700 people till date. Sierra Leone has already declared a state of emergency due to the rapid spread of the disease, which has no known cure.

Ebola’s symptoms include external bleeding, massive internal bleeding, vomiting and diarrhoea in its final stages. The disease kills up to 90 per cent of those infected, though the fatality rate in the current epidemic is running at around 60 per cent.