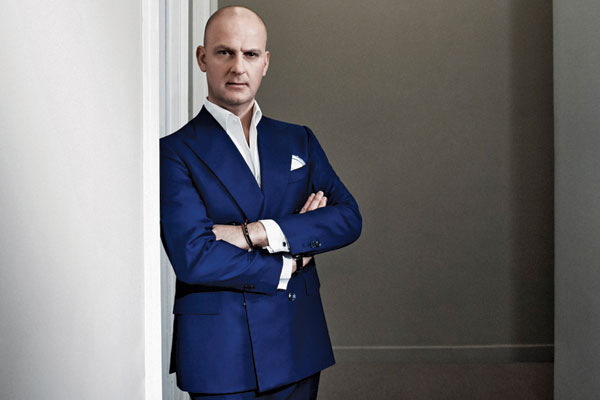 While most pre-schoolers concern themselves with storybooks, learning to count, and reciting their alphabets, Giuseppe Santoni was more interested in learning about brogues, Oxfords and derbies.

That’s because his parents had in the early 1970s set up a small-scale shoemaking business inside their modest family home in Marche, Italy.

“The shoe factory was located on the ground floor of our home. Back then only five or six people worked there. That’s how I got involved in the business since I was a child,” says Santoni when we meet on the sidelines of its first boutique opening in Dubai.

There was no doubt in the young Santoni’s mind that he would join the family business, and so bristling was he with youthful ambition that his parents appointed him as CEO of the company in 1990 when he was just 21 years old.

“My parents trusted me since the beginning and let me take strategic decisions as much as they let me make my mistakes in order to learn from them. I am very lucky because they allowed me to grow, and to try my ideas my way to grow the company.”

And grow the company he did. While his father, Andrea Santoni, had already made inroads into the American market – which remains its biggest market even today – the young Santoni’s role was to market the small-scale family-owned craftsmanship-focussed brand around the rest of the world.

But as a first step, he expanded the company’s shoemaking facility beyond the family home in order to ramp up production. “In 1990, we shifted the factory from our home to a new location. We expand the factory every three to five years and right now we have a 30,000 square metre facility and employ 700 people.”

With production raised, Santoni set out on an aggressive expansion spree that is now well into its third decade. The company now serves customers in over 70 countries, with 25 of its own boutiques, and a presence through high-profile luxury departmental stores like Harvey Nichols, Bergdorf Goodman, Neiman Marcus, Saks and Japan’s Mitsukoshi, among others.

“Our biggest market today is America, and we are present in various other countries across Europe, Japan, Eastern Europe including Russia, and the Middle East.”

However, the one market he has not yet been able to fully penetrate is China. “In China we started operations a few seasons ago. It is a very challenging market and we believe our business there can grow, but it needs more time.”

Here in the Middle East, there was a soft opening of its new boutique in Dubai Mall’s Fashion Avenue last year, and Santoni visited the emirate in March this year for the formal inauguration of his first store in the UAE.

“In the Middle East, our biggest market is Dubai. We have plans to open another store here,” he says.

Apart from partnering with some of the world’s most elite department stores and opening its own boutiques in key markets, Santoni has also collaborated with big luxury brands. It partnered with Mercedes-AMG to create a line of sneakers and travel accessories, struck another deal with ace Swiss watchmaker IWC Schaffhausen to create leather straps for a few of its watches, and also unveiled a co-branded shoe collection with fellow-Italian firm Rubelli.

While the brick-and-mortar business is continuing to do well, Santoni is determined to have a more solid footing within the e-commerce space. He says that he retails 30-40 per cent of the company’s production through its department store partners, which also have their own e-commerce operations, meaning Santoni only does about five per cent of its overall sales through its own e-commerce channel. 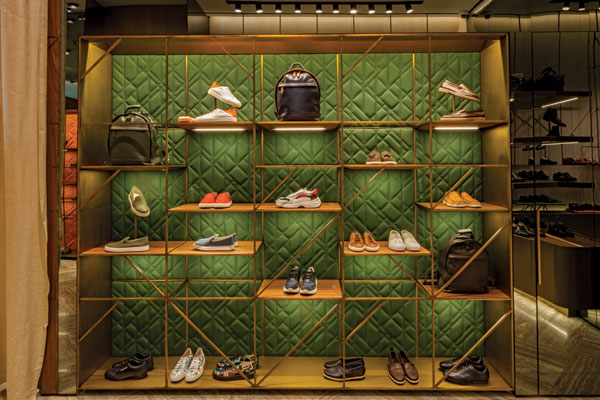 “Of course, we would love to increase our direct online sales, but it is not easy. You have the competition of your customers (department stores) who also sell online. To differentiate between them and us, we have special collections exclusive only to Santoni’s own website.”

Ramped up operations, first-class collaborations, special-edition collections and a smart expansion strategy to boot, Santoni now finds itself in the middle of a revolutionarily different business landscape compared to that in which the company was born – and the second-generation scion is not afraid to adapt, even if it means rocking the boat.

Up until 2006, Santoni only manufactured men’s shoes. But against the protest of the brand’s purists, Giuseppe made a strategic decision to enter the women’s market, a decision that has today paid rich dividends.

“Our numbers between men’s and women’s collection is now almost 50-50,” he says. “I will regard myself to have been a good CEO if I can make the ladies business bigger than men’s shoes. That’s really what all the fashion brands are doing. Ladies’ business is usually three times more than men.”

And while he’s shaking up the brand’s core product focus, he’s simultaneously spearheading a moment when the company is transitioning from formal shoes to more relaxed footwear. “The world is going casual and so we need to play on the rubber sole shoes and sneakers. The split between our sneakers and classic is also 50-50.”

Santoni has proved himself a canny operator when determining the future course of business, but there is always a mindful eye on the state of affairs back home within the shoemaking facility to ensure that quality and craftsmanship remain the central tenets of its business.

To that end, Santoni hires young designers who work alongside more senior craftsmen generating a sort of creative tension that he believes will ignite product innovation. “I create a situation in the company where a young generation of designers bring new ideas and try to innovate on the product. But I always say to my designer, ‘You can innovate, but you need to respect the production process and quality levels’.

“I say to my craftsmen, ‘Yes, we need to maintain our traditions of the work we do, but we also need to innovate otherwise we will not sell. You need to maintain the quality of the work, but also create new products’. So these two energies work together to create something that is innovative, yet respects tradition.”

To ensure that there is a new generation of craftsmen and designers ready to carry the mantle, Santoni has started a shoe-making school within its factory. “We train batches of 20-30 young students at a time for a period of six months on how to make shoes. Usually, these students are employed within our company itself. We regard these young people such that they don’t feel like they’re only workers, but that they’re really artists and artisans.”

In the meanwhile, while it is too early to be talking retirement or succession, Santoni does have a plan in place and it involves keeping it all in the family. He has a 19-year-old son and a 21-year-old daughter who he says will eventually join the company.

“The challenges of a family business are that you need to keep the family together in order to keep the business together. Our family is very solid and that is why we don’t have any problem in the business.”

While the Santoni brand could be worth a small fortune if the family sells to a larger conglomerate, he is categorical that at this stage selling is not an option. “Many people and big groups are interested in Santoni, but at the moment we believe that we can keep growing by ourselves.

“I would like to keep the spirit of the family in order to maintain the quality of our products. I do not have any examples of luxury brands where after becoming part of a big financial group, it has maintained its quality. When money and numbers enter a company, quality reduces to make those numbers work better.

“In our case, we do this work not only for the numbers, but we are also making these products with our family name on it. Big groups don’t care. They don’t have their name in the product. As long as they make money, they’re happy. Our target is not to make money, but to make shoes. That’s the difference between family business and financial businesses.”