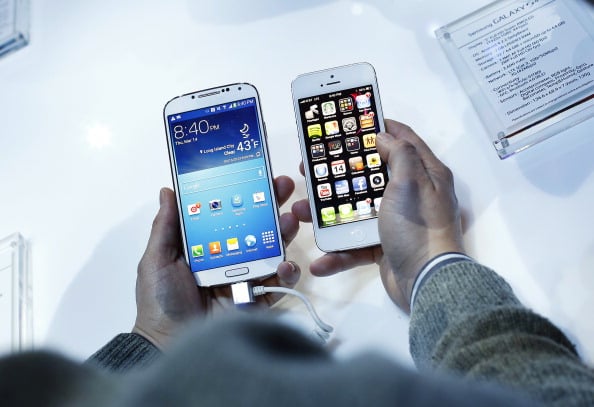 Samsung Electronics Co Ltd and Apple Inc said on Wednesday they had agreed to drop all patent litigation outside the United States, scaling down a protracted legal battle between the smartphone rivals.

The South Korean and U.S. tech giants declined to disclose the terms of the deal but said it did not involve “any licensing arrangements and the companies are continuing to pursue the existing cases in U.S. courts.”

The agreement ends patent disputes in Australia, France, Germany, Italy, Japan, the Netherlands, South Korea, Spain and the United Kingdom, countries where the smartphone market leaders had engaged armies of lawyers for what analysts said were questionable gains.

“Their fighting spirit has weakened and they now seek to focus on the key battleground, the U.S.,” said Young Park, a Hyundai Securities technology analyst in Hong Kong.

“They now see little need to wage a war around the world, which will only fatten the bills of lawyers,” he said, adding the deal raised the possibility of a final licence agreement settling how the companies use each other’s patented technologies.

Apple and Samsung together dominate the global smartphone market with a combined market share of 37.1 percent in the second quarter of 2014, according to Strategy Analytics.

Their legal battle began in the United States in 2011 when Apple first filed a suit alleging Samsung “slavishly” copied elements of its iPhones, the device which launched the industry.

Days after the initial Apple suit was launched in the United States, Samsung sued its Cupertino, California-based rival in South Korea, Japan and Germany, kicking off a series of tit-for-tat cases that spread around the world.

The litigation raged even as business flourished between the two technology companies, with Apple depending heavily on Samsung for components such as chips and liquid crystal displays.

An industry source familiar with the matter told Reuters the companies “decided that there was no merit in dragging on these lawsuits”. The source declined to be identified due to the sensitivity of the matter.

Nicholas Rodelli, an attorney and adviser to institutional investors for CFRA Research in Maryland, said there had been a “trend towards gradual de-escalation of patent hostilities between Apple and Samsung”.

“It’s not yet clear whether this is signal or noise, in terms of prospects for global settlement,” he said.

In the United States, Samsung is appealing the result of a blockbuster 2012 trial, seeking to undo $930 million in damages.

While Apple says those damages should stand, the iPhone maker last week withdrew its request for a permanent sales ban against several older Samsung phones, according to court filings.

Separately, Apple went to trial against Samsung on a second batch of patents earlier this year and won a $120 million verdict. Apple still has a request pending for a sales ban against newer Samsung phones in that proceeding.

On another front, Samsung is fighting Microsoft Corp over allegations it refused to make a royalty payment last year on patent licences after the U.S. company announced plans to acquire Nokia’s handset business.

Meanwhile, Apple and Google Inc’s Motorola Mobility unit agreed in May to settle all patent litigation between them over smartphones.

Apple and companies that make phones using Google’s Android software, such as Samsung’s top-selling Galaxy series, have filed dozens of such lawsuits against one another around the world to protect their technology.

Samsung Electronics shares closed down 1.2 per cent on Wednesday, compared with the wider market’s 0.3 per cent drop.