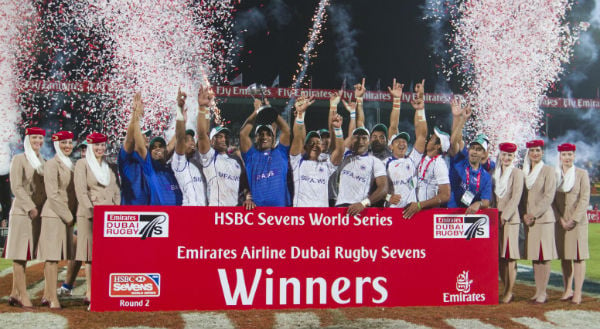 Samoa won the Emirates Airline Dubai Rugby Sevens at the weekend, their first ever stage win on the HSBC Sevens World Series.

The Pacific islanders beat tournament favourites New Zealand with a 26-15 victory at the The Sevens Stadium in Dubai on Saturday to lift the cup, much to the partying crowd’s delight.

It was a fitting finale to a festive weekend, which saw torrential downpour drench spectators and players on Friday, after a successful opening day on Thursday that saw local and invitational teams competing.

Samoa started the final strongly, scoring a try after just 12 seconds and maintaining their lead for the remainder of the match.

Samoa captain, Afa Aiono, said: “It was a great win for the boys. We have a young squad, but they believed they could do the job.

“If we are consistent in our performances for the rest of the Series, we can hopefully win it again.”

Samoa looked strong all weekend, sailing past Wales in the quarterfinals before beating a strong France side 12-5 in the semis.

Other results saw Wales pick up the Plate after beating Canada 21-14 in their final, while Argentia beat South Africa 14-10 to win the Bowl competition.

New Zealand’s women side won the first ever IRB Women’s Sevens World Series with a 41-0 win over South Africa in their final.

Gary Chapman, Emirates’ President Group Services and dnata, said: “Once again, we have been treated to a tremendous three days of action and congratulations must go to Samoa for a brilliant performance in claiming the trophy, as well as New Zealand women’s team for winning the first ever round of the inaugural IRB Women’s Sevens World Series.

“Despite the challenges that Mother Nature threw at the event, the spectators were amazing as always. The carnival spirit they bring to the tournament is what makes the Emirates Airline Dubai Rugby Sevens so special and is why, year after year, it remains Dubai’s number one event.”