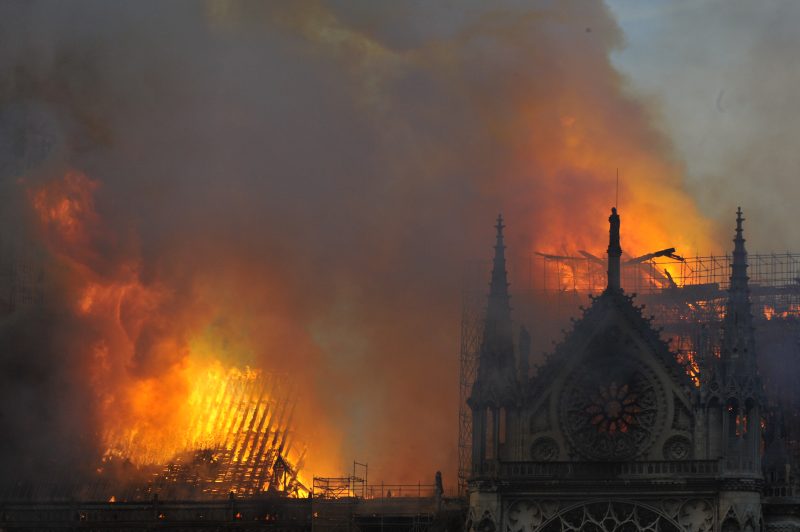 Thousands of onlookers lined the banks of the River Seine as firefighters battled to save the shell of the stone structure from collapse, with officials saying the blaze is now under control after a nine-hour campaign, though it will take several days to completely extinguish the fire.

The cathedral’s iconic spire and roof collapsed as the fire spread, though the cause of the blaze is yet to be determined. Reports suggest it started in the building’s attic, and could be linked to extensive renovation works that are taking place. 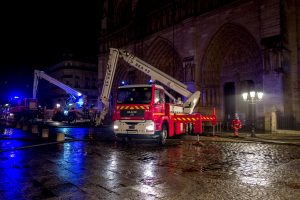 The UAE’s Minister of State for Foreign Affairs called the incident a “terrible tragedy” in a Tweet as the fire took hold, with other dignitaries from around the world adding their sympathies.

Very saddened by the terrible fire destroying the great Cathedral of Nôtre Dame. A sacred landmark important to France & beyond. Terrible catastrophe to see this unfold.

Former US President Barack Obama wrote: “Notre Dame is one of the world’s great treasures, and we’re thinking of the people of France in your time of grief. It’s in our nature to mourn when we see history lost – but it’s also in our nature to rebuild for tomorrow, as strong as we can.”

Meanwhile, the current incumbent, Donald Trump, said: “So horrible to watch the massive fire at Notre Dame Cathedral in Paris. Perhaps flying water tankers could be used to put it out. Must act quickly!” 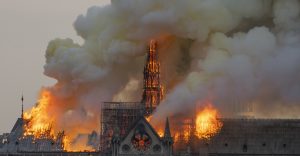 British Prime Minister Theresa May said: “My thoughts are with the people of France tonight and with the emergency services who are fighting the terrible blaze at Notre-Dame cathedral.”

French President Emmanuel Macron visited the site, vowing to rebuild the monument in a televised address.

“We’ll rebuild this cathedral all together and it’s undoubtedly part of the French destiny and the project we’ll have for the coming years,” he said.

“That’s what the French expect [and] because it’s what our history deserves,” he added, saying that “the worst had been avoided” with the preservation of the cathedral’s main structure.

The president also vowed to launch an international fundraising scheme for the monument’s reconstruction, with the billionaire chairman and CEO of the Kering Group – François-Henri Pinault – already having pledged $113m towards its rebuilding.

The cathedral was begun in 1160 and completed in 1260, and is considered one of the finest examples of French Gothic architecture – not least due to its then-innovative flying buttresses and huge stained-glass windows.

During the French Revolution in the 1790s, much of its religious imagery was damaged or destroyed, and later, in 1804, the cathedral was the site of Napoleon’s coronation as Emperor of France.

Located on the Île de la Cité in the 4th arrondissement of Paris, some 12 million people visit Notre-Dame each year, making it the most visited monument in the French capital.