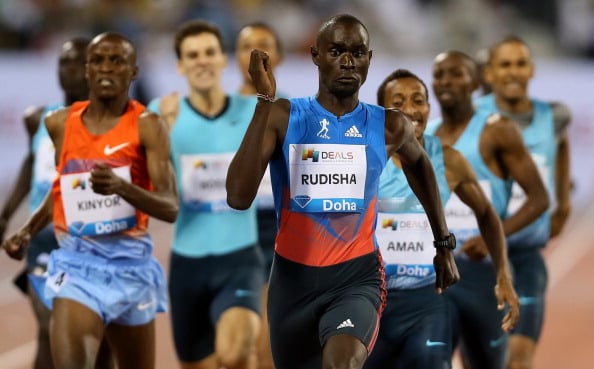 Kenya’s world record holder and Olympic champion David Rudisha had to work hard to secure victory over Ethiopian teenager Mohammed Aman in the 800 metres at the opening Diamond League meeting of the season in Doha on Friday.

London Games sprint champion Shelly-Ann Fraser-Pryce of Jamaica won the women’s 200 and American Justin Gatlin snatched victory in the men’s 100 as a host of Olympic medallists began their build up to August’s world championships in Moscow.

Gatlin, who claimed Olympic bronze behind Jamaica’s absent Usain Bolt and Yohan Blake came through in the last 20 metres to win in 9.97 seconds, 0.02 ahead of compatriot Michael Rodgers and Jamaican Nesta Carter who were given the same time.

The men’s 800 was billed as a head-to-head between Rudisha and Aman, the only man to beat him in the past two years.

With the pack bunching up behind Rudisha on the final lap, it looked as though the Kenyan, who tore the field apart to win the Olympic final in a world record 1:40.91, was under pressure.

Rudisha kicked with about 200 to go but failed to shake off Aman, who beat him in Zurich last year, before finally easing away down the home straight to win in a world leading 1:43.87.

Felix, wearing striking black knee-high socks and pink running spikes, had gone off quickly at the start but tired in the home straight and Montsho pulled ahead to win in 49.88 seconds.

There was some cheer for the home crowd in the high jump when Qatar’s Olympic bronze medallist Mutaz Essa Barshim finished second to Ukraine’s Bohdan Bondarenko who cleared 2.33 metres to set a meeting record.

The next Diamond League meet is in Shanghai on May 18.