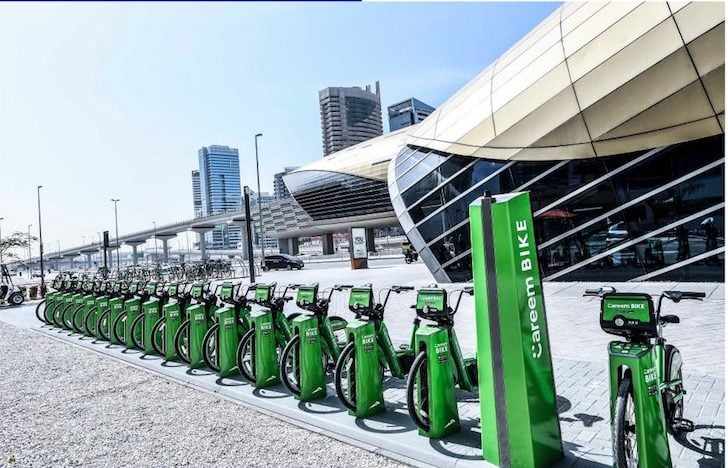 The bike sharing service will offer 780 pedal assisted bikes over 78 stations across Dubai as part of phase one of the project, Dubai Media Office reported.

RTA and Careem officially launched the first-of-its-kind bike sharing service in the region, providing 780 pedal assisted bikes over 78 stations across Dubai under the project’s phase 1 distributed over different areas of Dubai, pic.twitter.com/0K4I0QuMCR

Careem will depend on smart systems to track bicycles via GPS and anticipate the locations in high occupancy areas.

The solar-powered stations will allow users to pay and use the bicycles via the Careem Bike app, which will allow them to unlock the bicycle by scanning the QR code and entering a 5-digit code from the application into the station, a statement said.

The service caps the speed of the bicycles at 30 km/h in areas such as Dubai Marina, Jumeirah Beach Road, Jumeirah Lake Towers, The Greens, Barsha Heights, Dubai Water Canal, Dubai Media City, Downtown Dubai and Al Qudra, in addition to a number of safe roads across Al Karama and Al Mankhool.

According to Careem’s 15-year contract with the RTA, it will operate 1,750 bicycles and install 175 stations during the first two years. It would later increase them to a total of 3,500 bicycles and 350 stations over the next five years.

The overall bicycle tracks across Dubai will reach 647 km by 2023.

RTA has called upon cyclists to adhere to regulations that govern how bicycles must be operated across the emirate, such as maintaining a safe distance from vehicles and pedestrians, refraining from carrying materials that could destabilise the bicycle, adhering to all road/track signs and refraining from using two-ear headsets, among others.

Bicycles will not be rented out to or used by children below the age of 15, unless accompanied by an adult aged 18 or above.

“The service supports RTA’s efforts to create an integrated ecosystem that offers different transportation means, as it supports a vehicle-free flexible model and integrates within daily transportation services, using a safe and comfortable approach,” said Mattar Mohammed Al Tayer, director general and chairman of the board of executive directors, RTA, said.