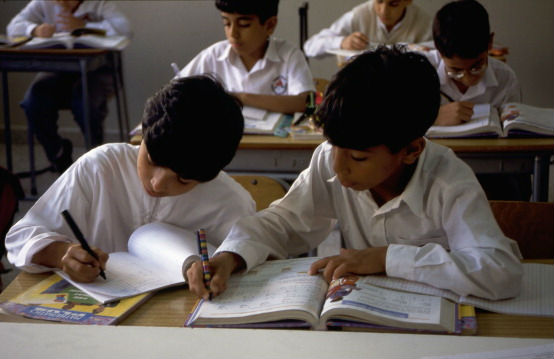 Rosetta Stone, the language-learning specialist, announced on Wednesday it is to open its first Middle East office in Dubai’s Internet City later this year.

“In addition to the Americas, Europe and Asia, our new Dubai office truly conveys our commitment to the Middle East’s innovative education initiatives,” said Whyte.

“Our investment is a testament to our confidence in the region and to our vision of being a critical partner in language education for governments, businesses and educational institutions that help drive some of the regions critical and most impactful education strategies.”

A World Bank report last month showed that public expenditure on education in the region stands at 18.6 per cent of total government spending, compared to a world average of 14.2 per cent.

Elsewhere at GESS, the UAE’s minister of education, Humaid Al Qatami, announced that eight new schools would open this year as part of the Mohammad Bin Rashid Smart Learning Programme.

The UAE is pushing various ‘smart learning’ initiatives across its education sector with the aim of modifying the current public school system.

The process includes providing every student with an electronic tablet and access to high-speed 4G networks as well as an e-library project, comprising of 11 thousand educational titles, in both Arabic and English.

Also at GESS, Doga Schools, the largest education system in Turkey, revealed plans to set up 10 new schools in the UAE and Qatar over the next five years.

The $15 million expansion is part of Doga Schools’ strategic plan to increase its network abroad, which currently includes schools in Turkey, Cyprus, and Canada.