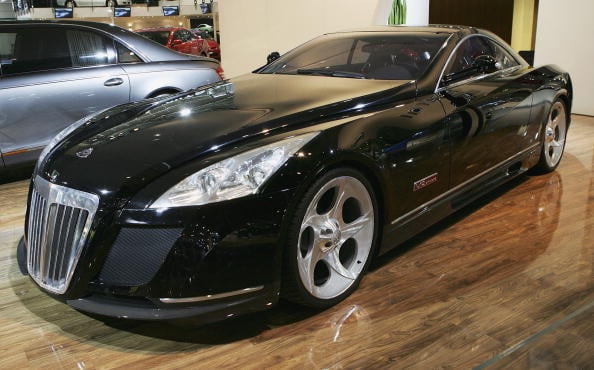 Often cited as perhaps the most luxurious, the Maybach Exelero is a high-performance sports car designed and built by German luxury car manufacturer Maybach. It was presented in May 2005 in Berlin and costs approximately $8 million.

This is followed by the Bugatti Veyron, $1.7 million, developed by the German car-manufacturer Volkswagen, and the Lamborghini Reventon, $1.6 million, which debuted at the 2007 Frankfurt Motor Show. It ranks as one of the most powerful and expensive Lamborghini road cars to date.

There has also been a flurry of vintages car sales recently.

The Ferrari 250 Testa Rossa in which the US driver Phil Hill won the 1958 Le Mans 24-hour race was sold by the French collector Pierre Bardinon for about $25 million.

In June, a 1962 Ferrari 250 GTO made for race driver Stirling Moss became the world’s most expensive car, selling at a private transaction for $35 million. The distinctive apple-green Ferrari is one of 39 GTOs produced from 1962 to 1964.

Meanwhile, the Ferrari GTO bought by UK television and radio host Chris Evans for about $18 million in 2010 was sold earlier this year for a million-dollar price ‘in the high 20s’, dealers said.

And a 1930s Bugatti Type 57SC Atlantic also fetched around $30 million after selling in a private transaction.

In the Gulf, customisation and uniqueness is where the money is at. Luxury car dealers often say that a man doesn’t want to find the same car in his neighbour’s driveway.

Therefore, the makers of medium to high-end premium vehicles can make as much on bespoke options as the cars themselves.

At the 2011 Dubai International Motor Show, the newly-released Aston Martin V12 Zagato appeared alongside a wide-range of the carmaker’s other best-sellers, including the four-door Rapide, Virage Volante, DBS Coupe and V8 Vantage S Coupe.

Sheikh Hamad Bin Hamdan Al Nahyan, a member of Abu Dhabi’s ruling family, is lauded for his extensive luxury car collection that totals up to 400 motors.

He has been nicknamed the Rainbow Sheikh for owning seven Mercedes S-Classes, each one in a different colour.

Wealthy car enthusiasts, perhaps less wealthy than Sheikh Hamad, are set to buy a record number of vehicles from the likes of BMW, Rolls-Royce, Fiat, Maserati and Porsche SE this year, according to local reports.

However, although luxury cars are great investments, it’s often not advisable to test their capability or race them against each other.

Media reports earlier this year said American investor and millionaire Christopher Cox smashed up his 1962 Ferrari GTO during a Ferrari rally. Apparently, Cox was hit from behind by another car while he was turning, forcing him into a crash that battered the car’s front end.

The Ferrari is thought to be worth upwards of $30 million, but perhaps not anymore.