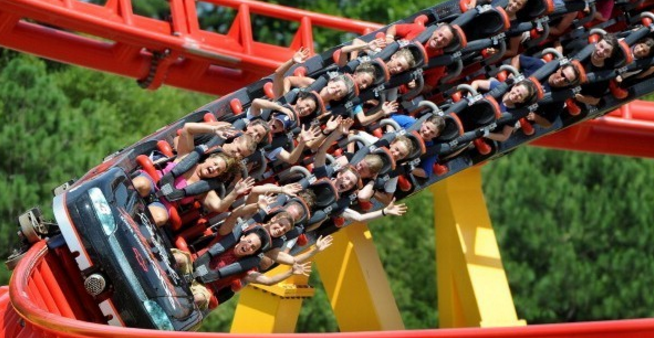 Dinosaurs, dragons, pandas and ogres – very soon you will be able to find them all in Dubai – and not just at the cinema.

The emirate is set to open several new theme parks and other attractions as it prepares to welcome up to 20 million visitors annually by 2020.

From Dubai Parks and Resorts – a mega theme park complex with Hollywood and Bollywood elements –
to the world’s largest dancing fountain, the city is set to emerge as an entertainment destination.

According to a recent report by PwC, the overall leisure and entertainment market in the United Arab Emirates has the potential to attract about 45 million visitors by 2021.

The firm estimates that the market could attract nearly 30 million visitors in the next six years. Residents and
their relatives will account for another 15 million. Theme parks that are currently under development will attract about 18 million visitors, PwC says.

The UAE could rival other entertainment destinations such as Orlando, Singapore and Hong Kong if it exploits its geographical location, attractions and investment in infrastructure.

“The UAE has come a long way to realise its global ambition of becoming a leisure and entertainment hub to rival Orlando, which is the current market leader,” says PwC Middle East partner and hospitality and leisure leader Philip Shepherd.

“The country has recognised that it needs to continue investment and focus on the quality of attractions, as well as appealing to a diverse visitor base from across the world.”

Dubai has a plethora of mega entertainment projects that are in the development phase.

Dubai Parks and Resorts, a Dhs 10.5bn mega development located in Jebel Ali, will feature a Hollywood themed park called motiongate Dubai (with rides from Shrek, How to Train a Dragon and Kung-Fu Panda), Legoland Dubai and Bollywood Parks Dubai. The mega project will also include a family themed hotel.

Elsewhere, the recently announced Meydan One development promises to break many records when completed. It will have the world’s largest indoor ski slope, largest dancing fountain at over 420 metres in length, highest 360-degree observation deck at 655 metres, highest sky restaurant at 675 metres and a huge mall among other attractions.

Then there are smaller scale attractions like the recently opened Dome Box, a 360-degree audio and visual theatre within Meraas’ Box Park development.

Showcasing short-movies, the 360-degree theatre is laid out with beanbags and can accommodate up to 80
visitors at a time. Tickets are priced at Dhs 45 for two movies or Dhs 75 for four movies and are valid for six months from purchase.

General manager Jean Marc Bled insists there is adequate space in the market for more attractions to come on-board because of increasing demand.

“We want to attract a wide range of visitors – that’s why we are not positioning ourselves at the high-end of
the pricing,” he explains to Gulf Business.

He is also confident of competing in such a booming market.

“It relates to the concept. We are not bringing something that already exists but we have something that is
unique and sustainable across time. It is not a one–off experience but we have a facility where you can easily come once a month,” he explains.

It is vital to offer something new and innovative to keep people entertained, agrees IMAX Europe, Middle East and Africa CEO Andrew Cripps.

The company recently opened its all-new laser projection technology screen in Dubai’s Mall of the Emirates in partnership with VOX Cinemas.

The new technology is the result of a $60m research and development investment by IMAX and the screen in Dubai is only the seventh in the world.

It forms part of a revamped VOX Cinemas complex within the mall. Other features include a luxury cinema experience called THEATRE by Rhodes created in partnership with Michelin star chef Gary Rhodes. The four-theatre concept offers fine dining along with a high-end cinema experience.

“I think when you offer people something special, like IMAX, like the THEATRE by Rhodes concept, people
will come back,” says Cripps.

He confirms that the company has seen huge interest in the market. Two more of its new IMAX laser screens will be coming to Dubai next year.

There will of course be challenges.

“For somewhere like Dubai where you have a very cosmopolitan, transient population and a high volume of tourists, the state of the wider global economy will always be something we need to be mindful of,” states Al Nuaimi.

The emirate also needs to ensure that it has a well-planned destination management system in place to successfully compete against more established locations.

But he asserts that all these issues are already being addressed.

For now, the industry is simply waiting for the fun to get started.