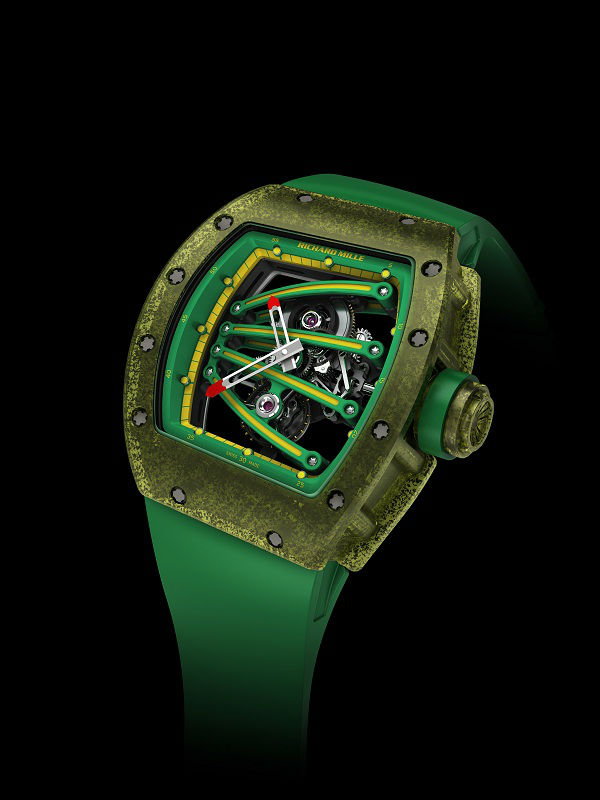 Richard Mille, the luxury watch maker has collaborated with his old friend Jean Todt, head of the FIA, as well as a number of famous sport stars for his company’s 2013 collection of watches.

The exclusive Swiss watchmaker has stuck to his penchant for celebrity-endorsed timepieces as the company unveiled watches inspired by Jamaican sprinter Yohan Blake, tennis star Rafael Nadal and football manager Roberto Mancini, each with specific functions suited to their respective sports.

Todt, the former CEO of Ferrari’s motor racing entity and the current president of the Fédération Internationale de l’Automobile – the governing body for several motor sports including Formula One – expressed to Mille his desire for a watch that could interpret the g-force a driver was experiencing during a race, said a spokesman for Richard Mille at its SIHH presentation in Geneva on Monday.

The result is the Toubillion RM-036 which incorporates green, yellow and red zones at the top of the watch that tell a driver if their deceleration speed and the amount of g-force they are experiencing is safe.

Todt was also behind a second watch to be released by the Swiss watchmaker this year, the RM 58-01, which makes keeping track of time through changing timezones easier, with a rotating bezel movement. A portion of the profits from the sales of both watches will go to the charity Helping Action for Road Safety and the ICM Brain and Spine Institute, which Todt co-founded.

Roberto Mancini, manager of Manchester City Football Club, was in attendance at SIHH as a watch made in his honour was unveiled.

According to a spokesman, Mancini had told Richard Mille of his difficulty at keeping track of extra time at the end of a football match, as it is not displayed anywhere on the pitch.

Mille’s solution was to make the RM11-01, which has a specific function to keep track of the amount of time added on at the end of a game.

The sprinter and Olympic silver medallist Yohan Blake was also immortalised by a Richard Mille timepiece, as the RM 59-01 was unveiled.

The watch incorporates carbon nanotubes for high-levels of shock absorbtion, four bridges evoking the claws of ‘The Beast’ – Blake’s nickname – across the face of the watch and is draped in the green and yellow colours of Jamaica – Blake’s home country.

Other sport stars to have a Richard Mille watch dedicated to them include Formula One racing driver Felipe Massa and American golfer Bubba Watson.