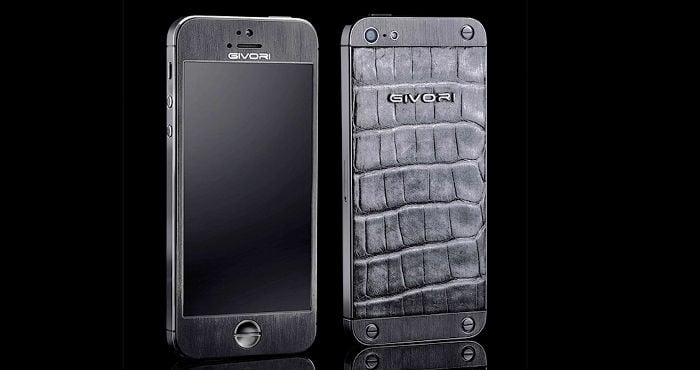 Luxury smartphone accessoriser Givori has launched a new rhodium-studded men’s collection of smartphones in the UAE and Saudi Arabia.

The Givori Phantom Black Platinum, priced at a whopping Dhs11,000, consists of an iPhone5 (64GB) customised with the rare precious metal black rhodium.

The back of the phone is made from Mississippiensis alligator skin, which has been treated with silver dust to give it a “distinctly masculine metallic finish,” the company said in a statement.

The phone’s silver elements have been bonded with rhodium, which attaches itself to the silver base through a heat-based casting process. The chemically inert transition metal has never been used in a smartphone before, said Givori.

All the customisations are 100 per cent hand-crafted in Italy, and all the rhodium parts are hand-brushed to create a Strisce (stripe effect).

Other features include an industrial accented screw-top navigation key and a nanotechnology film on the phone to prevent oxidation, fingerprints and colour fading.

The Givori Phantom Black Platinum, presented in a custom-made wooden box, includes one year’s warranty on all software, cosmetic and jewellery elements. All repairs even include a free pick-up and delivery service.

It is available at Axiom Telecom stores, Harvey Nichols and Damas Les Exclusives Boutiques in the UAE.

The UAE is certainly not new to bling gadgets; earlier this year, Dubai’s Burj Al Arab announced that it was rolling out 24-carat gold iPads for its guests to use during their stay. Those who want to take the gold iPad home need to shell out Dhs37,490 for a 64GB/4G model.