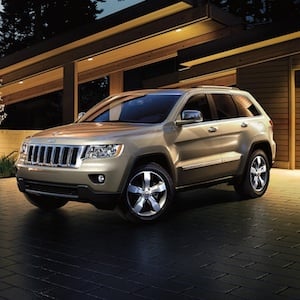 First off, this car is huge – it’s an imposing and sleek beast. And upon closer inspection of the specs, I’m proved right – the Grand Cherokee 2012 clocks in at nearly four metres long and weighs almost two tonnes. However, its generous form does little to drag the acceleration.

This giant still manages to perform like a sports car owing to its loaded 5.7-litre V8 engine, which generates 360-horsepower. New for 2012, the engine is also mated to the 65RFE automatic transmission, which allows the driver to choose between six-speeds when shifted in manual mode.

The 2012 Jeep Grand Cherokee is a mid-sized SUV produced by the Jeep division of Chrysler. This SUV segment is bustling with competition, including the Ford Edge and Explorer and the Volkwagen Toureg. However its mid-sized price tag leaves it directly out of the reach of the BMW X5. As the competition hots up, Chrysler has set out to refine its models each year. On many levels, the Jeep Grand Cherokee holds its own.

The new exterior is physically beguiling – it looks powerful but elegant, with clean, confident lines. The interior cabin exudes manners and polish. For a hardy off-roader, there’s a surprisingly wide-range of luxury gizmos and high-quality finishings with leather and wood accents. The new Jeep Grand Cherokee almost feels too bling too take out into the harsh desert.

However, this car still upholds its reputation for off-road prowess. An optional adjustable air suspension (Quadra-Lift) can vary ride height from 6.6 inches for easy passenger and roof rack loading, to 10.7 inches for serious off-road work.

One of the only drawbacks for the Jeep Grand Cherokee is its high fuel consumption; the V8 model is reported to return only 13 mpg in city driving conditions. So if you won’t be needing enough power to pull a small-sized house, then perhaps you’d be better off with the slightly more efficient V6 model. I also found the satellite navigation system very fiddly to use, but then I’ve never been any good with directions.

Dubai to begin trials of driverless taxis this year