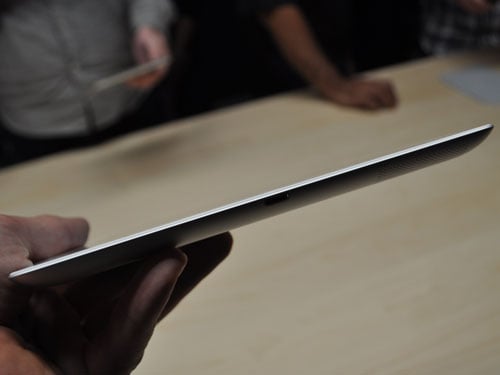 An army of mini-er, similarly mighty iPads adorns the demo tables at the San Jose launch event, and we’ve grabbed ten minutes to put one of the troops through its paces. Here are our (early, somewhat jetlag-addled) impressions.

Steve Jobs famously stated that a 10in screen is “the minimum size required to create great tablet apps.” Alternatives are yet to prove otherwise, but they have showed that 7in is ample, and arguably better, for consuming media on the go. So, how does the iPad Mini rate in that regard.

The Mini’s screen retains the 4:3 aspect ratio of its predecessors, so it’s squarer than elongated Androids such as the Nexus 7 and Kindle Fire HD. This means there’s a useful chunk of extra width (an inch, in fact) for reading and browsing in portrait mode, but it’s not optimised for movies – in order to fit widescreen 16:9 content in landscape, you’ll have to but up with the ‘postbox’ black bar effect.

No matter the media, it seems to get the basics right – colours are bright and lifelike, and the resolution of the smaller screen is fine – although the iPad 3, with four times the number of pixels (264ppi vs the Mini’s 163ppi), shows it up a bit in that respect.

As to how suited the Mini is to running apps with complex interfaces, the jury will remain out until we can get a sample to stick our favourites on. The likes of Korg’s iMS-10 synth use every millimetre of available screen space on the 9.7in iPad, which has 50 per cent more screen estate than the Mini, so whether those knobs and buttons become just too small on the new device remains to be seen. Of course, we’ll let you know.

Apple has done it again. The iPad Mini is a beautiful little thing, its curved edges rounding swiftly into a silky flat aluminium back. It feels solid right down to the details: the metal volume buttons are totally clatter-free, and the speaker grilles are mini works of art.

It actually seems as close in size to a phone as to a tablet, but because the bezel around the screen is so shallow at the sides, you get a good stretch of screen estate to play with. This is one desirable machine, whether you go for the all-black version or the shiny white one.

On the inside the iPad Mini is basically a concentrated iPad 2. The screen has the same resolution, and the same dual-core Apple A5 processor powers the same 275,000-odd dedicated apps. As a result it’s still smooth in operation, and we only noticed any stutter when scrolling into the universal search screen.

Given the importance of apps and screen quality to the tablet experience, we’d suggest the iPad is worth the extra. Have a hold of each and it might even be a no-brainer. It’s a very desirable device, and it’s going to sell like crazy this Christmas.