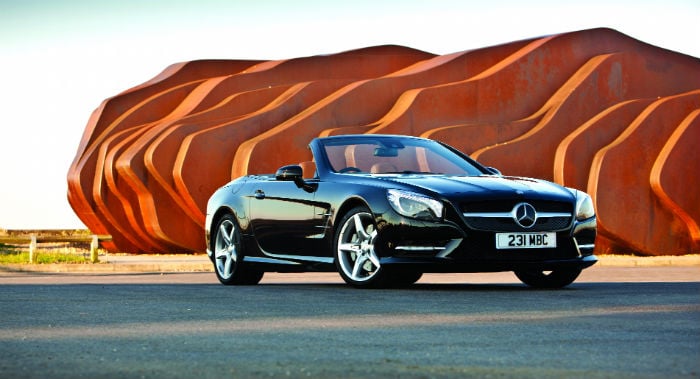 It was a windy, overcast day when I picked up the SL 500, whose matt grey exterior suited the prevailing weather conditions perfectly. The interior was nut brown nappa leather with high-gloss burr walnut trim. The brown leather might not have been my first choice, but the finishing is undeniably superb. Not a stitch out of place. The layout was typical Mercedes with white instrumentation and all the controls in familiar places. The only thing new to me was that the handbrake is now a button behind the gearshift and the indicator stalk is now one up from its standard position.

The SL 500 starts at $116,300, but the price quickly rises with options. The one I was driving was valued at $141,000, a sobering thought when you’ve just signed the indemnity form. Unfamiliar car, big price tag, bad weather – three good reasons to drive like a gentleman.

A push of the Start/Stop button fired up 4,663cc BlueEFFICIENCY V8 that emitted a pleasing low-key rumble. Driving a few kilometres it quickly became clear that the 7G TRONIC PLUS automatic transmission mates perfectly with the V8’s power output of 320 kW and 700Nm of torque. This is not a vehicle that hunts for gears. In fact, you don’t even notice the gears changing.

Cruising down Sheikh Zayed Road I saw some of the smaller cars being battered by the wind. But the SL 500 just cruised along majestically, its aerodynamics impervious to Mother Nature. There was some slight wind noise, but in these conditions it was forgiven. In fact, the SL 500 does a beautiful job of cocooning you from exterior interference. In ‘Comfort’ mode the suspension soaks up all but the most rutted tar. The steering is fairly light, so driving with one hand at normal speeds is easy though not recommended. The sound insulation lets through just the right amount of engine noise under normal driving, but you do know that you have a V8 under the bonnet when you accelerate.

In cornering the SL 500 is perfectly composed. Mine was fitted with AMG Sports suspension, which astounded me with its almost zero body roll. I tried hard to make the SL 500 lose composure with some high-speed cornering but the worst I could do was a slight twitch of the tail, and that was on a slippery brick surface. In ‘Sport’ mode the suspension feels almost identical in comfort terms, but it definitely works in the corners.

Another thing that works is the active multicontour seat package. I’d first encountered it in an S500 AMG, where I found it a bit gimmicky. But in the SL 500 it seems to operate faster and more intuitively. At acceleration the seat bolsters grab you and almost suck you in, while under cornering they keep you as stable as the car.

The SL 500 is a Grand Tourer (GT) and it does that perfectly. Comfort, ample space, luxury, excellent ride characteristics and handling all add up to a vehicle you can drive to work every day, park at the club house or go on a road trip. In fact, you might actually end up forgetting what a piece of finely honed technology the SL 500 actually is. After all, it goes 0-100km/h in 4.6 seconds.

With all that power the SL 500 makes short work of any overtaking manoeuvre. When you jam down the accelerator the engine let’s out a throaty rasp and you go through gears at an eye-watering speed. At 160km/h it feels like you’re going 60 because it does everything so confidently. If I were totally petty and picky I’d say that maybe the SL lacks in the excitement stakes. Then again, that might be another driver’s idea of motoring perfection.

The only other critique I can level at the SL, which is common to most two seaters, is that the long doors make getting in and out fairly difficult in tight parking spaces. But if you can afford an SL then you probably have reserved or valet parking.

The SL 500 definitely does live up to its credentials of outstanding design and engineering excellence. And yes, it is another fine addition to a motoring legend that started more than 50 years ago. The Mercedes engineer tasked with improving the next SL generation will face quite the challenge.

Exclusive: Oracle's global cloud leader on why he is betting big on the Middle East

Exclusive: Oracle's global cloud leader on why he is betting big on the Middle East