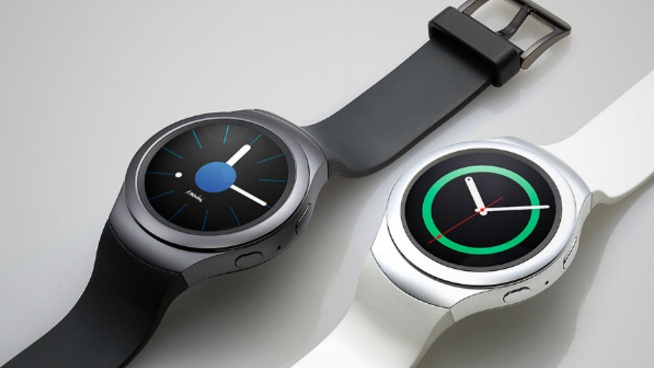 Samsung has had a chequered history in the smartwatch space with a variety of previous gadgets that never quite clicked with the consumer.

But if the Gear S2 is anything, it is a clear indication the company has learned from its past mistakes, not least because you do not need a Samsung device to use it.

First and foremost the device’s design, like many recent smartwatches, has clearly been given some attention with an eye catching circular display. It resembles your average wristwatch more closely than Samsung’s previous efforts and certainly looks more natural in day-to-day wear.

If there is one downside, the Gear S2’s rubber band and stainless steel casing with matte finish does look a little out of place with a suit or shirt. Although if you are looking for something more formal you can always opt for the classic version which comes with a leather band and a more expensive looking ceramic body.

To match this exterior, the device boasts a crisp OLED display with clear visuals and a variety of unique watch faces to choose from. You can opt for digital, modern, classic or others that show pictures, your heart rate and a step counter. In my opinion, the simpler faces are some of the best.

Design aside; perhaps Samsung’s crowning achievement with the S2 line is how you interact with it.

A rotating circular bezel on the outside of the display is used to switch between apps, settings and more all via the flick of a finger. It feels intuitive and perhaps most importantly addresses a key issue with modern smartwatches, interaction. Where as competitors have you fumbling with your fingers on the screen to view notifications, blocking your view in the process, the rotating bezel design means you rarely have to touch the display itself. In addition, the two side buttons mean you can access the app wheel or go back to a previous screen with a simple press.

The Gear S2’s other point of distinction is its operating system. While there are now several Android Wear smartwatches to choose from, the lack of customisation of the platform means they all function very similarly. Instead Samsung has opted for its Tizen OS, which is both a blessing and a curse.

It certainly makes the watch feel unique compared to its Android competitors, and has allowed Samsung to squeeze in some extra functionality. However, Tizen does make the device feel more limited when it comes to app downloads and it is hard to imagine the OS attracting the same number of wearable app developers as Google’s base offering.

The watch’s app drawer allows you to scroll between maps, news, music, and stopwatch and other applications easily. It also boasts a similar basic dashboard to Android Wear devices for viewing messages, email notifications, reminders, fitness information, music and the weather from the home screen.

Within the watch interface there is some respectable fitness functionality using the S Health app. The included heart rate monitor is more functional than Samsung’s previous attempts and comes set by default to perform checks at regular intervals. The built-in activity tracker also activates when you begin walking at a brisk pace, which is a nice touch.

However, other functions using Samsung’s own apps do not feel as polished. Most noticeably, the device’s voice recognition application S Voice seems a little slow to respond to voice commands compared to the Google equivalent. Another minor issue is that the display does not always inform you of new notifications, meaning you may not notice a message or email until some time after it arrives. This is in contrast to Android Wear devices that, perhaps a little too intrusively, show any notifications over the watch face as they come in.

It is also hard to escape the impression that Samsung would rather you connected the device (via Bluetooth) with one of its own smartphones, despite opening the S2 up to other Android handsets.

There was a noticeable difference in both the initial setup and quality of interactions over time when connecting the smartwatch to a Samsung-supplied phone compared to my own.

From the get-go, linking the watch to a non-Samsung smartphone requires no less than three applications to be installed. Following this you are then required to create a Samsung account to install apps on the S2, with some even requiring their Tizen versions to be installed on the connected handset to function.

While Samsung’s goal to create its own ecosystem is understandable, I cannot help but feel the shackles are still a little too tight for a device meant to have a broader appeal.

This point aside, the device left me impressed in many areas including battery life where it outlasts many competitors with up to three days of use – provided the display is set to switch off during inactivity.

It also comes with a magnetic wireless charger, meaning downtime is less of a hassle than some rivals, and is at the cheaper end of the market at under Dhs 1,000.

Overall, the S2 is an impressive entrant to the smartwatch space in terms of both design and functionality, but do bear in mind you may not get the same quality of experience if you own a non-Samsung smartphone.