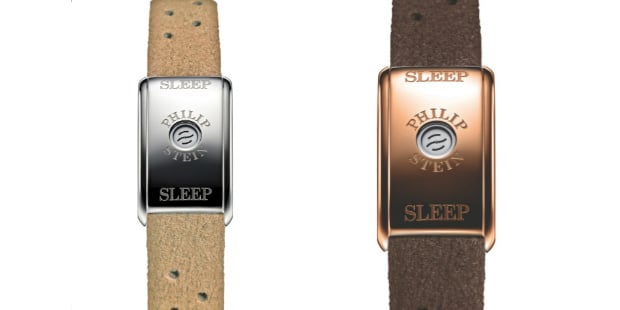 For those of us with hectic lives, engaged in lots of travel and carrying out an endless list of responsibilities, the prospect of unchallenged deep sleep is an attractive one. The Philip Stein sleep bracelet promises just that.

The Swiss maker – also famed for its high-end watches – claims it will “counteract the negative effects of everyday life and restore balance to your slumber”. How so? You might ask.

Well, the science used is known as ‘natural frequency technology’. It is said to harness the findings of German neurologist Hans Berger, who in 1924 discovered that the human brain had electrical activity – now more commonly known as ‘alpha waves’. A further discovery in 1952, by German physicist Winfried Otto Schumann, found that the planet had a pulse that was identical to that of the human brain – according to the company.

So each bracelet is embedded with a natural frequency technology ‘disk’, which sits next to your skin. The firm claims this acts as an antenna “tuned to capture specific natural frequencies, channelling them towards the body, which in turn benefits the body’s own rhythms, tuning the wearer back to a state where they perform and live at their best”.

Celebrity fans of the bracelet and watches include Oprah Winfrey, Madonna, Samuel L. Jackson, Jackie Chan and Rupert Murdoch. But can the bracelet, launched back in 2011, really deliver the natural equilibrium it promises or is this just a very expensive placebo? The price is a wallet-emptying Dhs 1,560.

However, the luxurious materials used from the stainless steel case to the ultra-soft microfiber strap and nice-to-the-touch box certainly make it feel like something you want to own. The aesthetic is impressive. But does it work?

Well, the truth is – it is very hard to tell. I trialled the bracelet for a month and I slept well, as I usually do. Did I notice an overall improvement in my sense of wellbeing? Not particularly. As someone who exercises a lot, I always feel relatively rested anyway. Anecdotally, a colleague in my office also tried out the bracelet. He said he thought he was sleeping deeper than before but could not say for sure.

And there’s the rub. Unless you are an insomniac, it is almost impossible to register any changes in your ‘body’s own rhythms’. The results – at least those that are perceptible to the average human – seem marginal.

Is the science really proven? Have we decoded the brain enough to sufficiently understand how its hardwiring works? Does the celebrity fan list suggest the bracelet is something of a luxury rather than a necessity for the sleep-deprived modern-day human? My experience with the product provided me with more questions than answers.

That is not to say I am right. From the reviews I read elsewhere, each person seems to have a different experience. Only a mass-volume scientific sample would prove the case one way or the other.

Meanwhile, Philip Stein claims the sleep bracelet is “an unmatched technology that truly works”. You either take that mantra as read and fork out the cash or torture yourself trying to work out if you got what you paid for. Whether such scenarios make for a better sleep is unclear.

From this reviewer at least, the jury is still out. But if money is no object, you too can include a Philip Stein product on your list of ‘favourite things ever’ – as Oprah Winfrey once did live on American television. Goodnight and good luck.