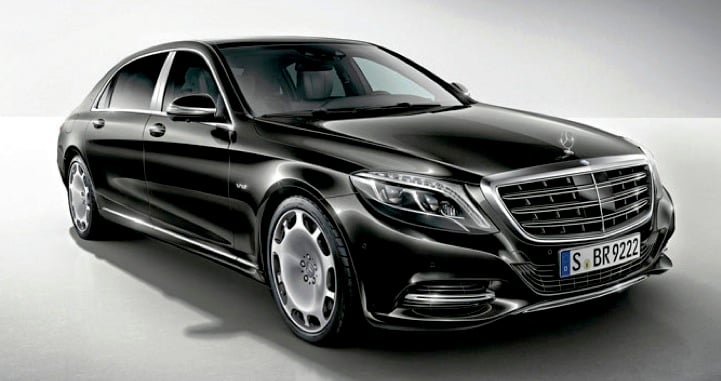 I was having one of those days when I felt so lazy I couldn’t even reach for the TV remote control without having to get up.

The sun was blaring through the curtains on a warm afternoon but that was okay because they were electric, so I just flicked a switch to close them, then poured myself a cold drink straight from the fridge and watched a movie.

Luckily the long-stemmed glass containing my drink had its own holder, which stopped it from sloshing whenever we went over speed humps.

Welcome to the rear of the Mercedes- Maybach S600 which, if you were flying commercially would be ‘welcome to your first class suite,’ because it has all the hallmarks of Seat 1A on any Emirates, Etihad or Qatar Airways flight.

The return of Maybach has been a carefully orchestrated move. The last and only car of the modern Mercedes era to wear a Maybach badge didn’t exactly sell a storm as it was based on outdated technology before it was launched.

This time, however, there’s no pretending to be something it’s not. The new Maybach is now badged as the Mercedes-Maybach S600, making it clear that it’s part of the Mercedes S-Class family, rather than a brand of its own, but very much as the flagship in the range.

This is all part of a larger plan to introduce the Maybach brand across a wider range of Mercedes models, so that it will become the luxury division of Mercedes-Benz, and at the same time AMG will tone down its uber luxury presence and become the sports-focused member of the Mercedes family.

It makes perfect sense and the S600 is the perfect way to bring the Maybach name back into the fold.

At over six metres long, it’s a full 200mm longer than the long wheelbase S-Class and, as I found out, this has quite a beautiful impact on the interior space for the rear seat occupants.

Other than an added chrome trim, a Maybach logo on the C-pillar, a badge on the boot lid and a unique grille featuring three twin-row chrome louvers, there’s nothing else outwardly that tells you this is a Dhs 800,000 pimped-out penthouse on wheels.

While the S600 it looks similar to the S-Class from the front in profile, it displays a heightened elegance brought on by heavy chrome trimming around the windows and shiny, satellite dish-sized, chromed alloys. When combined with the window garnish, this creates a very Bentley Mulsanne-eque profile.

As it’s hoped that most owners will be the ones riding in the back, attention to detail has gone into everything behind the B-pillar.

So for the driver and front passenger, there’s little to nothing that would alert you to the fact that it carries a Maybach badge.

Up there it’s all S-Class in look and feel, with only a slightly more sluggish feel under the accelerator pedal giving away that you’re punting the extra weight over the S600L.

The Nappa leather-covered rear seats recline beyond the C-pillar so you can peak out through the tiny quarter windows behind the rear door. This adds to the limousine feel and gives a feeling of supreme exclusivity but keep reclining and they unfurl into an almost full flatbed.

Adding to the first class airline feel are the timber-veneered tray tables, which hydraulically slide out of the centre console at the perfect height for laptop use, note taking or devouring a decent meal on the go.

Power comes from the six-litre V12, twin-turbo engine used in the S63 AMG. It punches out 530bhp and 830Nm of torque from just 1900rpm, so it’s not short of grunt under the right foot either. Providing a seamless near endless surge of power that’s so linear and quiet it feels like the Queen Mary on full steam ahead.

Only if you’ve driven the shorter, lighter S600 AMG will you notice the power difference. If not, then you’ll have nothing to worry about.