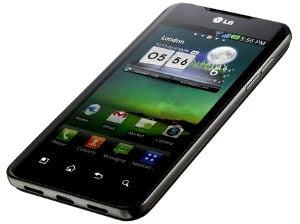 Consumers have been crying out for a dual-core smartphone and LG and Nvidia have delivered the first one (Samsung’s Galaxy S2 and the HTC Sensation are in the pipeline). Key to the LG Optimus 2X is the impressive dual-core Tegra 2 1GHz CPU, coupled with an impressive low-power GPU from graphics specialist Nvidia. Video is the main beneficiary of the dual- core processor, which is why LG has outfitted the Optimus 2X with 1080p video recording on the eight-megapixel camera, 1080p playback over a mini- HDMI port (cable included) and DLNA media streaming.

The processor makes the user interface noticeably quick and smooth when, for example, you’re switching from portrait to landscape view while looking at a web page or photo. It also shows what Google’s Android operating system is capable of on the Optimus 2X’s four-inch 480 x 800 WVGA touchscreen. There’s also a 1.3MP front-facing camera, Wi-Fi and 3G connectivity, and a microSD card slot to compliment the 8GB of built-in memory.

Amazon brings Alexa, compatible with English and Arabic, to the UAE