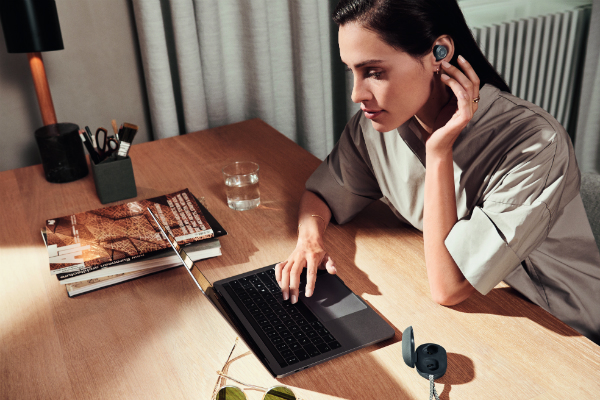 The fully wireless earphone category is still very much a work in progress at this point, with a mixed reception to some of the initial products last year or two.

But over time the reason for picking up a pair is growing as technology and (most importantly) battery life improves, and more and more companies are getting in on the action.

Among them is Danish electronics firm Bang & Olufsen with its Beoplay E8 product, one of the market’s most stylish – and most expensive – entrants to date.

Out of the box, one immediate point of distinction is the little leather pebble-shaped case, which appears both subtle and sophisticated. It is also practical too, keeping the buds in place for charging via magnets when they aren’t in use.

The earpieces themselves are sleek and discreet if a little similar in appearance to some of the other products on the market. However, one differentiator from most competitors is the aluminium ringed B&O logo on either side, which doubles as a touch pad.

After opening the box, removing the buds from the case and connecting them to your phone is a relatively simple process of switching into connection mode by holding your finger on the right bud’s touch pad and finding it on your phone’s Bluetooth settings.

The manufacturer has included several different ear tip sizes to choose from, among them a foam pair, but I found the default ones slipped in just one and stayed in securely for the most part.

Once they are in you can truly begin to appreciate what you are getting for your money. The sound quality is crisp; delivering meaty base and rich vocals and you can tweak the settings through the B&O app depending on your preferences or mood – something that can’t be said of some rivals.

This combined with the lack of wires and the comfortable design means you can almost forget you are wearing them during a commute or workout and they excel in both areas.

For commuting in particular, the included transparency mode – which is switched on by tapping the left touchpad – allows you to hear different levels of background noise while out in public so you have some awareness of your surroundings. If I have any criticism, it is that the mode isn’t very well explained, and by default mutes sound altogether before you change the setting on the app to one of the other options: ambient, social or commuting.

Meanwhile, during a workout I was particularly pleased by the E8’s ability to stay snug and out of the way in my ears during a variety of different exercises at the gym. In comparison my usual Bluetooth buds would fall out half a dozen times or more.

Built-in microphones on both sides mean you need not worry about taking a call on the go and the touch pads allow you to change track without reaching for your phone either.

You can tap the right ear bud to play or pause, double tap the left or right to move back or forward a track and hold each side down to lower or raise the volume. In practice this feels a little unnatural and less sleek than the design itself, with many attempts to change track ending with the music being paused during initial testing, although accuracy did improve over time.

Qualms about the touchpads aside, you can be assured the E8 won’t die on you – at least for a few hours. In testing I found the buds did often live up to the four hours of battery life promise and with the case fully charged you can get an extra two full charges on the go – meaning up to 12 hours before plugging in.

So this of course leaves the question are they worth the money? I think the answer will likely depend on your listening habits. If you’re someone who can’t do without a backing track to your commute or workout there is certainly a lot to like here, but for something to whip out occasionally you may want to research some of the less expensive alternatives on the market.

The Beoplay E8 is available for Dhs1,199