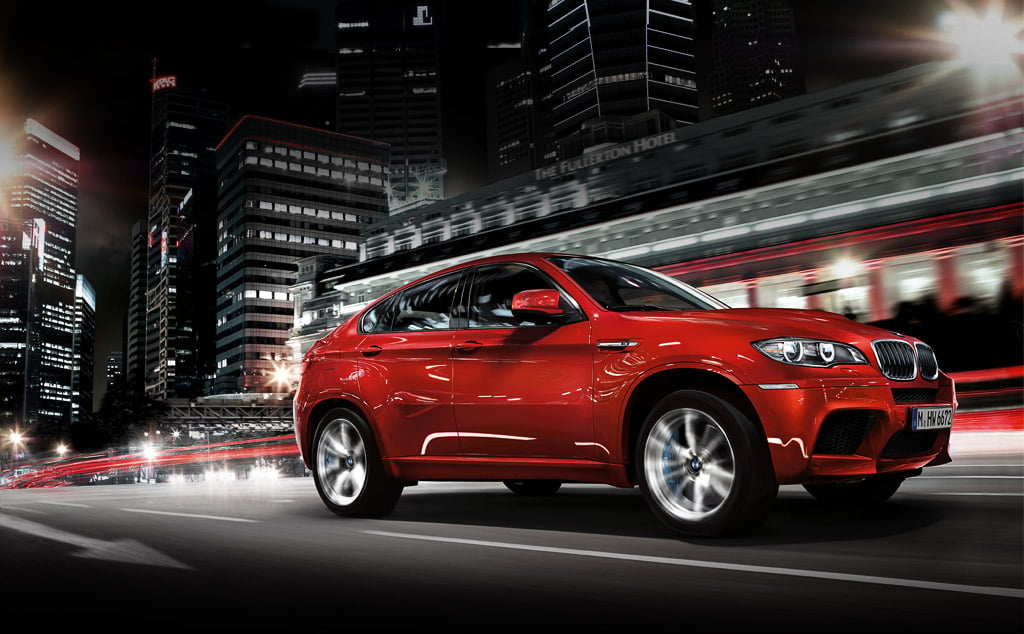 The BMW X6 M is a monster. It’s fast off the mark, consumes corners with glee and is ever so slightly mad. It is also an extremely confusing vehicle that caused plenty of head scratching on my part. Like, why would you buy an X6 in the first place, when the technically identical X5 offers more space? Who needs a SUV-type vehicle that drives like a sedan and has just about no off-road qualities? And what exactly is a Sports Activity Vehicle (SAV)?

Compared to the BMW X5, the X6 definitely has a “go faster” shape thanks to the aggressive slope of its roofline towards the rear. However, that reduces headroom for rear passengers and eats up a lot of cargo space. The X6 also only seats four people in its standard configuration, while the X5 accommodates five. So practicality is definitely not the X6 M’s first concern. And then there’s the price of around $100,000. For that money you can buy yourself an equally impractical sports car or a high-performance sedan.

The production X6 made its debut at the Geneva motor show in 2008. When the M version was announced it set off a frenzy among purists and nicely contradicted all the things that BMW’s M division said it would never do: Such as using 4WD, a turbocharger or an automatic gearbox. The X6 M features all three.

The 2013 version of the X6 M has received a minor facelift, but things are basically unchanged under the bonnet. New is the “power dome” hood that hints at the horsepower beneath, reshaped kidney grilles, a slantier set of headlights, and reworked tail lamps. Also new is BMW’s Active Sound Design, which transfers engine noise through the stereo’s speakers to enhance the sound experience of driving this 408kW rocket.

The interior is typically minimalist BMW with all the familiar instrumentation. Buttons are in scarce supply as the generous amount of electronics features is controlled through the customisable iDrive interface. The materials and finishing are as you’d expect from a vehicle in this price class. Visibility is good, except for the rear where it is limited by the dramatic roofline.

Up front the driver sits upright in typical SUV, or maybe that should be SAV, fashion. The driving position is extremely comfortable, but feels somewhat strange. Let’s put it this way, normally when I’m behind the wheel of a vehicle that does 0-100km/h in 4.7 seconds I’m used to reclining in my seat with my legs stretching out in front of me.

On the road the BMW X6 M is a surprisingly well-behaved beast. I came to that realisation when I was driving home along a narrow road and I entered the corner as fast as I normally do with my Porsche. Yes, the X6 M has a high centre of gravity, but you don’t really feel it unless pushed to the absolute limit. In fact, it is incredibly athletic for its 2,380kg weight. The neutral handling, strong grip and sporty characteristics are thanks to a battalion of high-tech aids designed to keep the laws of physics at bay.

Life gets really interesting when you push the “M” button. The heads up display changes and so does the performance – drastically. The throttle becomes more sensitive, shifts become more rapid and the exhausts let out a throaty bark during upshifts under full throttle. Turbo lag is minimal, while the acceleration is a total adrenaline injection. But perhaps the most amazing thing is that the BMW X6 M can put down 680Nm of torque without tearing up the tires. Wheel spin, forget it!

However, it seems one can confuse the electronic systems. Breaking for speed bumps, immediately followed by flooring the accelerator brought the Dynamic Stability Control into play and it took the X6 M a split second to decide what to do next. I could almost hear the thought process: “The silly bugger has braked hard, I’ve just gone over a major bump and now he’s floored the accelerator. Hmmm, don’t think I can trust this human.”

Not quite trusting the human is definitely a good thing in a vehicle with so much power. But it also has to be said that the BMW X6 M is not some soulless set of wheels ruled by the digital world. It feels thoroughly analogue, by which I mean it is the superb mechanics and driving ability that stand out, and not the electronic nannies.

The BMW X6 M definitely makes a statement. Yes, the X5 is more practical and if I had $100,000 I’d rather buy an M5. But I think the X6 M driver doesn’t give a hoot for practicality or being sensible. The BMW X6 M simply says: “I am what I am and I’m having fun. Now get out of my way.”