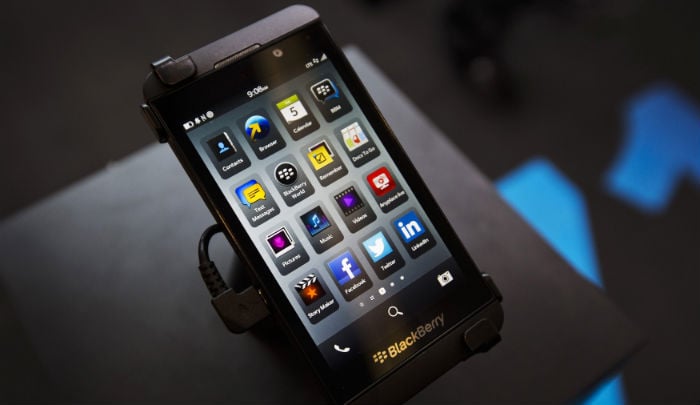 The BlackBerry Z10 was launched last week amidst a lot of pressure and high expectations. After all, it’s not often that a single device (along with its yet-to-launch physical keyboard version, the Q 10) carries the weight to make or break an entire company.

Luckily, it seems like BlackBerry has hit the mark with the BB Z10.

The device has all the ingredients of a good smartphone today: it looks sleek, feels light and comes packed with a decent set of features.

Technically, the device comes with 16 GB of storage and also has a memory-card slot for further expansion. The back panel has been created with an exclusive material that BlackBerry CEO and president Thorsten described as thin, light and strong and it disengages easily for SIM/battery change.

The touch-screen phone’s 4.2-inch screen has a sharp display (356 pixels) and the colours are fairly vibrant. But the phone’s touch responsiveness was not great, and it also seemed a tad slow when changing screen orientations.

“The BlackBerry 10 devices offer simply the best typing experience in the industry. Period,” Heins said during the launch.

Thankfully, the keyboard lives up to its hype. While the letters are large, making it easy to type, the phone’s special feature is its word prediction. As soon as you start keying in each alphabet, the BB Z10 starts predicting word options that appear right above the next letter you might type.

To accept any word, you just have to swipe it to your text, and the phone then guesses your next word. Very smooth. And the best part is that it slowly learns your language and starts predicting quite accurately.

During the launch, Heins called the BB 10 the phone for the “multi-tasker.” And the free-flowing interface reflects that.

The BlackBerry Hub is the one-stop destination for all your mails, your social networking accounts and your messages, and the phone’s Peek and Flow features are designed to help you move seamlessly between apps and the Hub.

Using the phone is all about swiping; you swipe up from the bottom to turn it on, you swipe left to right to reach the Hub and swipe right to left to reach your apps page.

My favourite feature however is Time Shift – once you capture an image on the phone’s 8 MP camera, the software offers you footage of a couple of seconds before and after the image was taken, allowing you to choose your subject’s perfect expression. No more eyes-closed/freaky smile photos.

I have so far been unable to test the BBM video/screen sharing service, which might be a problem in the UAE.

Another much-touted feature, the BB Balance, which is supposed to help users draw a line between their work and personal lives, is unfortunately available only to BlackBerry Enterprise Server customers. A real shame.

Coming to one of the main factors that may decide the Z 10’s future, the apps. Although BlackBerry ensured that the BB10 platform has over 70,000 apps, including some of the big ones like Facebook, LinkedIn, Twitter, Kindle and Angry Birds, the overall selection is still not as good as iOS or Android.

All in all, the phone looks and feels great, and easily matches up to an iPhone or Samsung Galaxy S3. But it doesn’t seem to have that extra ‘zing’ factor that may persuade existing iOS or Andriod users to make the switch.

The phone is priced at Dhs2,599 at retail stores in the UAE and will be available from February 10.