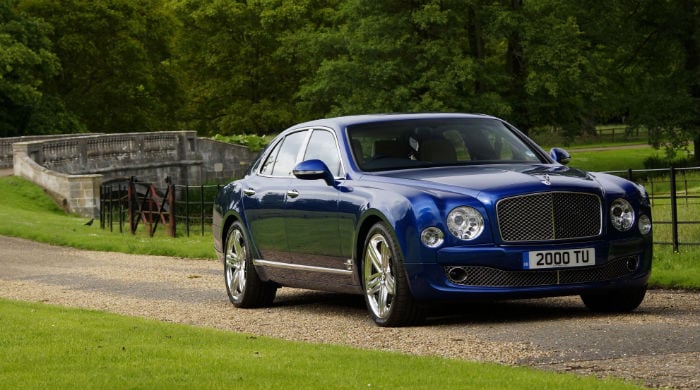 The Bentley Continental GT blew me away when I tested it. The Mulsanne – a 5.575 metre long limousine weighing 2,685kg – targets a different customer. But don’t be mislead, that famed Bentley performance lurks under the hood in the form of a 6.75-litre twin-turbocharged V8.

When Bentley discontinued the ageing Arnage it convinced Volkswagen, the parent company, that the Mulsanne would be designed and developed at its Crewe headquarters. The move paid off as the Mulsanne sits on its own unique monocoque platform, and parts were only sourced from Volkswagen where it made sense. The control-arm front suspension of the Mulsanne, for instance, is shared with the Audi A8t. The body is manufactured at Crewe unlike those for the Continental range, which are made in Germany.

The result is that the Mulsanne looks and feels like a Bentley. The exterior design combines power and presence with aristocratic lines inspired by the 1930 eight-litre Bentley sedan. The big oval main headlights that dominate the front, however, are somewhat overpowering.

Not that you’ll care when you sit behind the steering wheel with the bonnet stretching in front of you. The interior has more wood and leather than a Victorian-era gentlemen’s club, with an Old Word ambience to match. There’s an unbroken ring of wood trim around the cabin, as well as a leather-covered headliner. The fascia is clad in glossy wood, surrounded on all sides by soft leather (Every Mulsanne uses 17 hides) and punctuated by polished stainless steel fittings. There’s no Breitling clock, as in previous Bentleys, but the usual organ-stop ventilation controls are there.

Don’t be fooled by the traditional handcrafted interior though, as everything is thoroughly modern. Near the top of the centre console an eight-inch satellite navigation screen appears magically from behind a veneered door. An iPod, BlackBerry or MP3 player can be connected to the in-car audio system whilst remaining out of sight in a hide-lined drawer. Hidden inside the glovebox is the heart of the infotainment system, with a 60GB hard disc that drives the satellite navigation, audio and video files, personal data, telephone and Bluetooth connectivity. The cherry on top is the superb 14-speaker ‘Naim for Bentley’ sound system. The Mulsanne also features 10 airbags, ESC, TC, ABS, EBD and plenty of other acronyms to keep you safe.

Under the bonnet lies the true heart of the Mulsanne. The relatively low-revving 6.75-litre V8 puts out 377kW at 4,200rpm and a monstrous 1,020Nm of torque at 1,750rpm that enable the Mulsanne to hit the 0-100km/h mark in an impressive 5.3 seconds. Even more impressive is the rolling acceleration that takes care of most upstarts with disdain. The ZF eight-speed automatic is incredibly smooth and almost seems to read your mind, making manual shifts totally superfluous. But the V8 also has a fuel saving party trick, namely cylinder deactivation to turn it into a V4 under light load. This happens so imperceptibly that I didn’t even know the Mulsanne had this ability until I read about it.

The air suspension system allows the Mulsanne to be both a cosseting limousine and an involving and controlled sports saloon. The Rolls-Royce Ghost floats on its suspension, while the Bentley transfers more road contact. From a driver’s point of view that’s a good thing as you feel more involved. The Comfort setting is designed for city driving and the open road. In Sports mode the suspension firms so you can push harder into corners, but it gave me a few white-knuckle moments as the laws of physics asserted themselves. The best compromise is ‘Bentley’ mode, which was set up by the engineers in Crewe. It makes the car’s steering weightier while the suspension programs itself for tighter body control.

The Mulsanne is fun to drive, especially when seen in context of its size and weight. The view across the bonnet is clear, so you can aim for corners with precision. There’s always power when you need it, and you’re not afraid to use it as the 400mm front and 370mm rear discs keep the Mulsanne on a short leash with excellent pedal feel and a good resistance to fade. The steering is light but still gives enough feedback. And then there’s that masterpiece of an engine with its sonorous growl when pushed hard.

In short, the Bentley is a true driver’s car. But it also offers an extremely comfortable and quiet ride thanks to acoustically treated windows and solid sound dampening. However, creating a driver’s car imposes an unavoidable compromise in that it doesn’t have the pillowy ride of the Rolls-Royce Ghost. But the Bentley Mulsanne could well be the world’s best luxury saloon if you want a sporting drive.