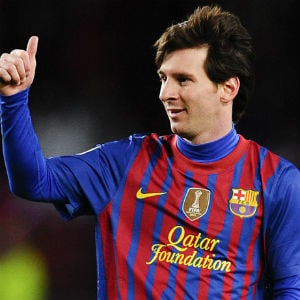 The clubs had to have funding from a Gulf-based company or individual. This is how they qualified:

In 2004 Arsenal signed a 100 million deal (about $160 million) with Emirates for naming rights to their new stadium and shirt sponsorship until 2021. Emirates is of course run by Sheikh Ahmed bin Saeed al-Maktoum, of Dubai.

This time last year one of the most recognised brands in world football unveiled their new shirt sponsor, Qatar Foundation. Reportedly worth $235 million, the deal sees Barcelona wear the foundation’s logo on their famous strip until 2016.

Though they’ve not yet reached the vaunted heights of their Arabian-funded rivals, Malaga is owned by Sheikh Abdullah bin Nasser Al Thani, a member of the Qatari ruling family, and chairman of Nasir Bin Abdullah and Sons Group. A club to watch for the future.

Probably now, following their Premier League title success, the most well-known for being Arab-funded, Manchester City has Abu Dhabi’s money coming out of their ears.

They play at the Etihad Stadium, have begun building a training complex which will arguably be the best in the world and have an unrivalled cheque book for signing new players. All headed up by the Abu Dhabi United Group owned by HH Sheikh Mansour bin Zayed bin Sultan Al Nahyan.

Qatar raises its head again here. The Qatar Investment Authority is the sole shareholder of PSG and in becoming so earlier this year, made PSG the richest club in France.

From these five teams we set about picking our Arab-funded World XI. We thought it would be easy we were wrong. Who would make it into your team? Have your say in the comment section below.

Stiff competition from Barcelona’s Victor Valdes and Arsenal’s Wojciech Szczesny but Hart’s season has been the best of his career, cementing himself as the number one keeper in the English Premier League.

Overloaded with world-class central defenders, we have ignored the need for a left wing back (that’s the beauty of a fantasy team) and gone with three solid defenders in Puyol, Alex and Kompany. Dani Alves is a terrier on the right. Kompany and Puyol to share the captaincy.

The toughest position to choose, Barcelona’s entire midfield is arguably the greatest in the land and contains arguably the greatest ever player in Messi. However given Manchester City’s title success this year, much of which was down to the silky Spanish skills of David Silva and Yaya Toure’s brute strength, these two are impossible to ignore.

Picking Aguero leaves several of his own teammates on the bench, not to mention those from the other clubs, but the Argentine’s contribution this season was huge, rounding it off with the winning goal to ensure Premier League triumph. Robin Van Persie, Arsenal’s captain and talisman, winner of the Golden Boot award and the PFA Player of the Year. He scored 37 goals in all competitions. Enough said. Though that’s only just over half of Messi’s tally of 72