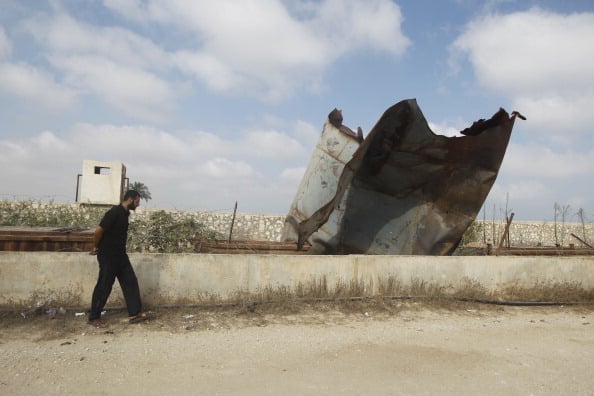 A renewed truce between Israel and Hamas appeared to be holding on Thursday despite a shaky start, after both sides agreed to give Egyptian-brokered talks more time to try to end the Gaza war.

The Israeli military said Gaza militants breached the truce and fired eight rockets at Israel and that in response, aircraft targeted multiple “rocket launchers and terror sites” across the enclave.

Hamas official Izzat Reshiq denied the Palestinians had breached the truce, and denounced Israel’s air strikes as “a violation of the calm”.

No casualties were reported in any of the incidents, and hostilities ended by dawn.

A halt in more than a month of fighting, in which 1,945 Palestinians and 67 Israelis have been killed, had been set to expire at midnight on Wednesday. The violence is the deadliest since the two sides fought a three-week war in the winter of 2008-9.

At the last minute, the Palestinians announced in Cairo that the truce was extended by another five days for the sides to work out a long-term ceasefire, mediated by Egypt.

“Israel has accepted the ceasefire extension,” said an Israeli official, speaking on condition of anonymity.

Bridging the gaps between Israel and the Palestinians in order to secure a permanent ceasefire has proven difficult.

Hamas and its allies want an end to the Israeli and Egyptian blockade on Gaza. But Israel and Egypt harbour deep security concerns about Hamas, the dominant Islamist group in the small, Mediterranean coastal enclave, complicating any deal on easing border restrictions.

Hamas leader Ismail Haniyeh told Al-Aqsa Hamas television on Wednesday that the group would insist on “lifting the Gaza blockade” and reducing movement restrictions on the territory’s 1.8 million residents, as a prerequisite to a “permanent calm”.

Members of the Palestinian delegation said they would return to Cairo on Saturday night to begin more talks on Sunday.

A Palestinian official with knowledge of negotiations in Cairo said Egypt had presented a new proposal for a permanent truce.

Egyptian and Palestinian sources said Israel had tentatively agreed to allow some supplies into Gaza and relax curbs on the cross-border movement of people and goods, subject to certain conditions.

A Palestinian demand for a Gaza seaport and reconstruction of an airport destroyed in previous conflicts with Israel has also been a stumbling block, with Israel citing security reasons for opposing their operation.

The sides have agreed to delay discussion of any agreement on the ports for a month, a Palestinian official said.

As part of the Egyptian blueprint, Israel was expected to expand fishing limits it imposes on Gaza fishermen to 6 miles (10 km) from the usual 3-mile offshore zone.

“It will increase gradually to no less than 12 miles in coordination between the Palestinian Authority and Israel,” the official said, referring to a likely expanded role in Gaza for Western-backed Palestinian President Mahmoud Abbas, based in the occupied West Bank.

In addition, the official said, the Egyptian plan calls for reducing the size of a “no-go” area for Palestinians on the Gaza side of the border from 300 metres (328 yards) to 100 metres so that local farmers can recover plots lost during security crackdowns.

Israel and Hamas have not met face-to-face in Cairo: Israel regards Hamas, which advocates its destruction, as a terrorist group.

Israel launched its military campaign on July 8 and declared its aim was to quell cross-border rocket fire from Gaza and destroy tunnels used by militants.

Most of the nearly 2,000 Palestinian dead have been civilians, hospital officials in the small, densely populated enclave say.

The heavy civilian losses and the destruction of thousands of homes in Gaza – where the United Nations said 425,000 of a population of 1.8 million have been displaced by the war – have stoked international alarm.

Israel pulled ground forces out of Gaza last week after it said the army had completed its main mission of destroying more than 30 tunnels dug by militants for cross-border ambushes. It now wants guarantees Hamas will not use any reconstruction supplies sent into the enclave to rebuild the tunnels.