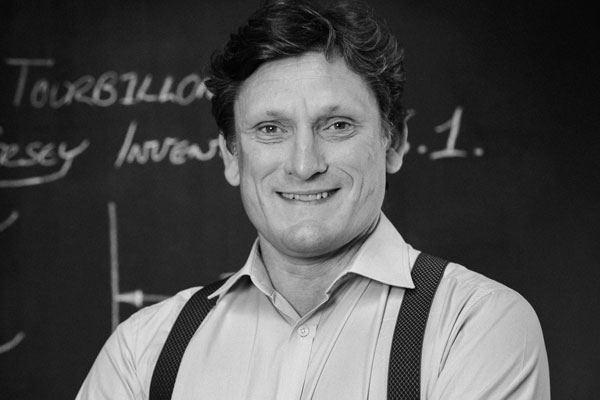 It seems scarcely believable that a watchmaker would state that its existential purpose is not to produce watches for sale. But for the La-Chaux-de-Fonds headquartered watchmaker, Greubel Forsey, its mission statement couldn’t be clearer. “Our focus has been to understand the mechanics of time measurement. Our interest as watchmakers is to research and innovate, which is why we’ve established our own in-house laboratory,” says Stephen Forsey, who along with Robert Greubel established Greubel Forsey in 2004 as primarily a mechanical watch research and experimentation division.

“Mechanical time measurement has existed for a few hundred years. During that time, it went from a big tower clock to a table clock to a coach watch to a pocket watch and then to a wristwatch. We’ve seen miniaturisation, but fundamentally the same concept each time.”

Watch production for sale is merely an ancillary business. “Of course at some time we have to build timepieces and get collectors to be our patrons to support our work to feed the machine,” explains Forsey who says that there are a total of 115 people employed at Greubel Forsey and their combined output is only 105-110 watches manufactured for sale annually.

The in-house mechanical watch research laboratory at Greubel Forsey has led to a treasure trove of inventions. The company has created 22 calibres since its inception, eight of which are currently in production.

There have been seven ‘mechanical inventions’ – seismic breakthroughs in mechanical watchmaking – developed by Greubel Forsey in the last decade-and-a-half too. If you’re wondering just how significant those inventions are, think of the first one, the Double Tourbillon 30°, in which two tourbillons rotate at different speeds and the cages are inclined at an angle of 30 degrees relative to each other. The goal was to maximise the accuracy of the watch and to prove that a tourbillon wasn’t just a decorative accessory on a timepiece but one that could take performance and accuracy to the next level.

Then there’s the company’s experimental watch technology programme, which has again reinvented a few core pillars of watchmaking. The latest concept watch in this category is the Nano Foudroyante EWT, a watch in which Greubel Forsey is addressing two fundamental questions of mechanical watchmaking – how to micro-engineer watch components so that they use a minimal amount of space (without compromising on performance) and how to make watch mechanics ultra efficient in their power consumption.

With the Nano Foudroyante EWT, now in the prototype stage, Greubel Forsey has hit the jackpot. The foudroyante seconds mechanism is smaller than any other foudroyante ever created. “We’ve been able to use 85 per cent less volume than a traditional mechanism for the same display and performance,” says Forsey.

It isn’t about creating more energy then, but rather using the energy created far more efficiently that is at the heart of the mechanical nano project. What that means is that this watch could possibly have a power reserve of a staggering 180 days.

Alongside mechanical innovations in watches like the Différentiel d’Egalité and Double Balancier, another major focus area of Greubel Forsey is to safeguard traditional watchmaking techniques. An example is the Naissance d’une Montre timepiece. Robert Greubel, Stephen Forsey and Philippe Dufour decided to take on an apprentice and show him how to handcraft a tourbillon watch from scratch. They chose French watchmaker Michael Boulanger and over a course of six years taught him to build the Naissance d’une Montre watch completely by hand – an art form that he can then pass on to someone else as well.

Greubel Forsey lays great emphasis on artisanal crafts. Timepieces like the Art Piece 1, created in collaboration with nano artist Willard Wigan in 2013, had a nano sculpture placed inside the watch – Wigan’s shapes these sculptures under a microscope during the time between his heartbeats in order to avoid shaking. Certain components of these sculptures can be smaller than a red blood cell.

Tellingly, of the 115 employees, 22 have the sole job of decorating and hand finishing every single component. Given that they only make around 105-110 watches, it means that each of these individuals on average work on only five watches a year.

There are only around 1,400 watches created by Greubel Forsey since its inception, though its reputation has spread across dozens of countries. “For just over 100 pieces a year, we are present in 35 countries and have 42-43 retail partners of sale. Since the very beginning we’ve never sold direct to collectors, but worked with the support of specialist retailers who understand the philosophy of Greubel Forsey. They are like our ambassadors. Every time we meet a collector from a new region we don’t know, we try and build a collaboration with an ambassador from that region, with that ambassador being a retailer,” says Forsey.

Here in the UAE, the watchmaker has partnered with Ahmed Seddiqi and Sons. “We’ve partnered with Seddiqi since 2005, almost at the beginning of Greubel Forsey. The Seddiqi family are passionate watch enthusiasts and they could immediately understand that we had a different mission at Greubel Forsey and so they supported us from early on. I’ve been coming to Dubai ever since then.”

Forsey says that he’d prefer Greubel Forsey not to be referred to as a ‘brand’. “I don’t know if we can call ourselves a brand because it implies global awareness, volumes and a marketing-driven orientation – we don’t have any of that. We are more of a signature, much more confidential, because of the challenges and time invested into each piece. The watches are exclusive and rare. Robert Greubel and I are independent and have complete control over Greubel Forsey so we can decide what we can do and won’t do.” And what they won’t do is ramp up production anytime soon – likely never.