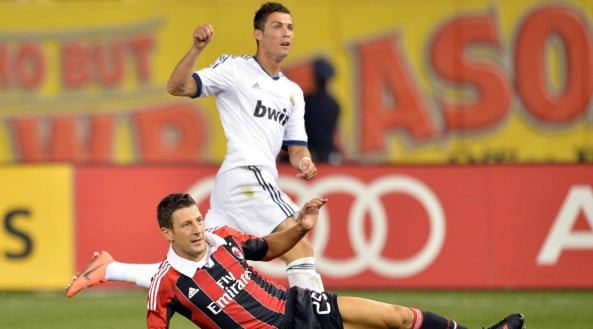 Football fans throughout the region will be licking their lips at the prospect of Real Madrid and AC Milan going head to head in a friendly at The Sevens Stadium in Dubai on December 30.

The fifth edition of the Dubai Football Challenge, timed to fit in with a season break, sees UEFA Champions League 2013/14 winners Real and their host of stars play in Dubai for the first time. Tickets are expect to sell out quickly and up to 42,000 fans are expected to attend, with prices from Dhs200.

Two of the European club’s leading ex-players and ambassadors, Emilio Butragueno (Real) and Franco Baresi (AC Milan), attended the conference at the Emirates Group headquarters on Monday to promote the match.

Hamad Mohammed Bin Mejren, executive director of Dubai Convention and Events Bureau at DTCM, said Dubai is fast-becoming a global destination of sporting events and securing such a high-profile game will further raise the sport’s profile locally and internationally.

An Emirates spokesman said the match falls within both teams’ existing sponsorship agreements. “We are trying to work out what we do around the game – maybe we do some access to training sessions or a day of entertainment, rather than just come to the game.”