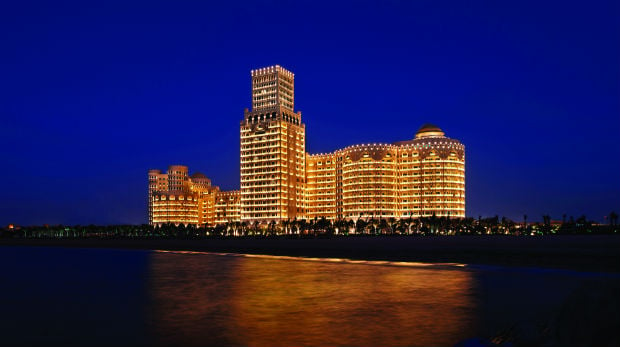 Ras Al Khaimah (RAK) has long strived to offer a quiet escape for local and international travellers, but until recently the northerly UAE emirate was more famous for its industrial darlings, such as the phenomenally successful RAK Ceramics or homegrown pharmaceuticals giant Julphar.

Swollen trucks and errant cement lorries still weave a familiar criss-cross on the emirate’s dusty landscape, but in the distance glints the majestic Waldorf Astoria hotel – a towering, regal nod to the sheer gusto of the government’s drive to put RAK on the tourism map.

The government has pledged around $500 million to help build and expand existing infrastructure and capacity. Despite rapid growth in the sector, tourism still contributes only a modest two per cent to RAK’s GDP. The government is aiming to boost this to an estimated 15 per cent by 2020.

This month, UAE low-cost carrier Air Arabia will begin flying into RAK, taking over from the failed RAK Airways, which suspended operations for the second time earlier this year. The move is expected to significantly boost national and international visitors.

Katie, PR manager for our hotel stay, guides me up to the top balcony of the 346-room Waldorf Astoria. From this dusky vantage point, the litany of cranes and lights in the Arabian Sea underlines the rapid progress of RAK’s fledgling tourism ambitions. Katie points out the nearby Al Marjan island, the newly opened reclaimed land project, “it’s like RAK’s own version of Dubai’s The Palm,” she says, with a glint of pride.

With four new hotels so far this year on Al Marjan island alone, the Waldorf Astoria faces competition from the breakneck-speed development of its neighbours, but Katie says it’s all part of a building a tourism ecosystem that will help shape RAK into a complete destination in its own right.

Opened in August 2013, the Waldorf Astoria was originally commissioned by the royal family as an apartment showpiece for RAK’s ill-fated America’s Cup bid. This is why the place simply looks like a palace – it was literally custom-built for royalty. It’s even become known as the ‘Sheikh’s’ palace because it receives so many royal guests each week.

The hotel’s vast domed entrance is willowy and imperial. A team of neatly dressed service staff rushes from the wings to valet my car and I’m offered a smooth check-in experience, complemented by a date-inspired beverage and a cool towel.

The majesty inside the lobby area is a surprise – it’s an all-out, no expense spared job, with interior design from The Gallery HBA London. The sweeping spaces are inspired by a historical pearl diving theme, with calming shades of turquoise and pearly white.

Central to the lobby is Peacock Alley, a signature lounge found in all the Waldorf Astoria hotels. A ring of banquettes flanks a specially commissioned $400,000 clock tower, a tiered marble fountain, and a spectacular chandelier with peacock- shaped feathers. The fountain naturally creates ‘white noise’ – a deliberate tactic on behalf of the hotel to encourage conversation and confidentiality in the open area.

The Waldorf Astoria is more of a resort than a simple hotel. With 10 F&B outlets, including an intimate New York-style steakhouse, a high-end cocktail bar and a sprawling poolside restaurant, it would be easy to while away a few days at this premium complex.

For all the luxury that sweeps through the hotel’s common spaces, the best part of the stay is the room. The rooms are uncommonly large and beautifully appointed in a low-key Arabian style. Most also offer great views of the Arabian Sea. The swanky black marble and gold bathrooms and mega-sized walk-in wardrobes complete the princely picture.

Above all, the Waldorf Astoria retains a homely, relaxed atmosphere where the staff can’t do enough to help you. This is a standout feature and makes a refreshing change from some of sister emirate Dubai’s non-descript and blandly luxurious offerings.

The Waldorf Astoria is an ambitious addition to RAK’s hospitality landscape, this hotel will go far to bolster the emirate’s tourism push.