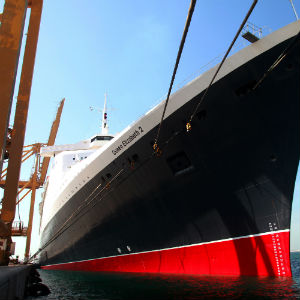 Plans to turn the Queen Elizabeth 2 ship into a luxury hotel and moor her off the tip of Palm Jumeirah have been scrapped, with sources saying she will now remain moored in Port Rashid and left with many of her original fittings.

The new project unveiled by the ship’s owner Istithmar World, the investment arm of Dubai World, said the former cruise ship will still become a luxury hotel but only 300 of the originally planned 1,000 rooms would be redeveloped.

The original plans for the QE2 were scuppered during Dubai’s 2008 debt crisis. Istithmar World bought the vessel for $100 million in 2007.

“Unfortunately we had many ambitious plans but they didn’t work,” said Sultan Ahmed bin Sulayem , chairman of Istithmar World.

“There have been many grand ideas. There were plans of renovating it in such a way that it becomes something totally different than what it used to be. But we realised soon that a lot of people like the ship as it was,” he said.

“What we are doing now we should have done when we got it.”

The new plans will help turn Port Rashid into a tourist hub, complete with maritime museum, according to Sulayem.

The common areas, including the restaurants and entertainment areas, will be largely left as they are.

Matthew Green, head of research and consultancy at CBRE Middle East, said: “Dubai continues to diversify its tourism offer and the spectacle that is the QE2 will be another important draw for visitors to the emirate.

“To be positioned in the new cruise liner terminal at Port Rashid, the new luxury floating property will aptly sit alongside the proposed maritime museum.

“With tourism numbers already estimated to be up around 10 per cent again this year, it is likely that further hospitality projects will be launched as parties look to exploit the favourable conditions with demand for now seemingly unabated.”

Launched by Britain’s Queen Elizabeth more than 40 years ago, the ship has had little use since arriving in the emirate apart from hosting a New Year’s Eve event last year.

Talks have been on going with three hotel operators including the Jumeirah Group.

The conversion work is due to be completed in 18 months.