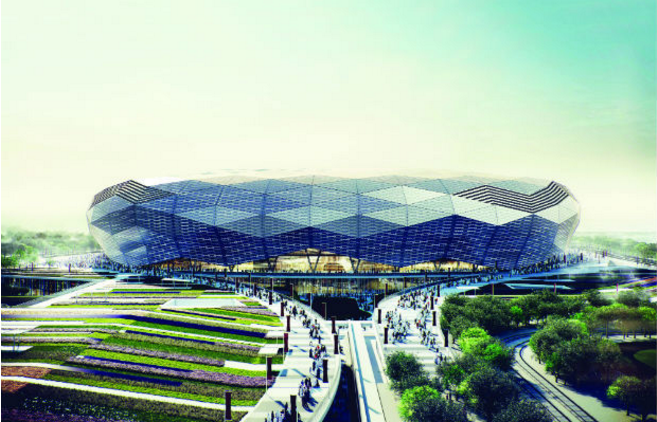 Qatar may be one of the smallest countries in the world in terms of area but it is among the big- gest in terms of ambition. Its determination to host the FIFA World Cup in 2022 – the most watched sporting event in the world – is nothing short of mind over matter.

It is also a demonstration of Qatar’s soft power. Not content with being the world’s largest liquefied natural gas exporter and one of its richest countries in terms of gross domestic product per capita, the government is also looking to flex its financial muscle by staging major events.

“For Qatari authorities, successful engagement with – and leadership of – global sport is one of the most effective mechanisms for promoting better understanding of Arab and Eastern cultures,” according to PM Bran- nagan and R Giulianotti, authors of the Soft Power and Soft Disem- powerment: Qatar, Global Sport and Football’s 2022 World Cup finals report.

“The hosting of such an event is perceived by Qatari authorities as, in effect, increasing the nation’s soft power in terms of highlighting Qatar’s professionalism and responsibility, as both an Eastern nation and also as a micro-state that is able to deliver on its goals.”

Indeed, one of Qatar’s key aspirations is to “use sports participation to forge friendships and improve relations between countries worldwide,” according to the Qatar National Development Strategy 2011-16.

But FIFA’s decision to award Qatar the right to host the tournament has not been without controversy. From allegations of bribing officials to secure the tournament, to inadequate working conditions for labourers employed to build the stadiums, the country has been in the headlines for all the wrong reasons.

While it looks to paint the picture of an attractive, well- managed and modern nation its reputation has taken a hit.

“Although there have been signs that Qatari authorities are aware of some of their fallacies – particularly their abysmal human rights record – how far they are willing to go to rectify the current soft disempowerment situation they find themselves in remains to be seen,” Brannagan says.

While the chance of FIFA rescinding its decision to award the hosting rights are slim, the country will remain under scrutiny over its conduct towards the labour force. This pressure will heighten as 2022 nears.

For its part, Qatar has remained steadfast and brought in new rules and regulations to ward off criticism.

With less than seven years to go before the first world cup game in the Arab country, there is little time to waste. Preparations have now started in earnest.

“The authorities are executing a $200bn infrastructure programme to advance economic diversification and view prepara- tion for the FIFA 2022 World Cup as an intermediate step in their long term plan to lay the foundation for sustained growth in the non-hydrocarbon sector,” says the International Monetary Fund.

Qatar is expected to be home to nine brand new climate controlled stadiums and three revamped stadiums across seven Qatari cities. The stadiums will have a minimum of 45,000 seats, reaching an 85,000 capacity for the Lusail Iconic Stadium in Al- Dayyan. This will host the first and last game of the cup.

Work has already begun on seven of the stadiums scheduled for the tournament at Lusail, Al Wakrah, Al Khor, Al Rayyan, New Airport, the Khalifa Sta- dium and the Qatar Foundation Stadium – at a cost of $32bn.

In many ways, the FIFA World Cup is a key plank of the Qatar National Vision Strategy 2030. It envisions bold plans to develop and deepen the non-oil sector.

“In order to deliver both the World Cup and the National Vision, Qatar is expected to invest heavily in both capital pro- jects and infrastructure over the next decade,” according to consultancy EC Harris.

“As the economy moves closer to the World Cup, 2013 and 2014 have proved to be the crucial flag off years for the bulk of the building and infrastructure projects across the economy,” says Ventures Middle East. “Construction activity has witnessed a tremendous spurt as a result with spillovers on tourism and hospitality segments of the building construction sectors.”

The development of the sporting infrastructure is already having a positive impact on the economy at a time when crude oil and natural gas revenues have fallen.

“High government spending, primarily on infrastructure, has led to a rapid inflow of workers, especially by construction firms,” the IMF says.

The economy grew 4.1 per cent in the first quarter of the year, a shade higher than the fourth quarter of last year, even as oil prices crashed.

“The non-hydrocarbon sector continues to be the engine of growth, expanding by 10.6 per cent in 2014 and 8.9 per cent in Q1 2015,” Qatar National Bank says. “Spending on major projects is the foundation of economic growth in Qatar and this has continued apace despite lower oil prices, as the government has reaffirmed its commitment to continue its investment programme.”

Going forward, QNB expects non-hydrocarbon growth of 10.4 per cent this year and roughly 10 per cent annually over the next two years, as new sporting infrastructure and other developments take shape.

Apart from stadiums, ancillary developments include a road and rail network featuring, metro lines, roadways, highways and flyovers. An airport revamp to accommodate the anticipated spurt in tourists and passengers is also planned.

“As work begins on the nine stadia to host prestigious world’s sporting events, a $62bn budget has been allocated in 2014-15 toward infrastructure, hotels, transport and stadia. Qatar’s largest infrastructure budget to date has zoomed 16 per cent over 2013- 14 allocations,” reveals the Bharat Book Bureau.

The nation has been steadily raising its profile in the sporting world. State-owned Qatari Diar along with a British partner, has acquired majority shares in the 2012 Olympic Athletes’ Village and Qatar Sports Investment group acquired French football club Paris Saint-Germain in 2012. Qatar Airways also has a €150m sponsorship deal with Spain’s FC Barcelona.

The country hosts a number of tournaments including the Qatar Open Tennis Tournament, the Qatar Open Golf Masters and numerous sporting conferences. These include the annual Doha Gathering of All Leaders In Sports and the Securing Sport symposium, convened by the Qatar-based International Centre for Sport Security.

In addition, the country successfully held the 2006 Asian Games and the 2011 Asian Cup football tournament and is gaining valuable experience in hosting large events.

Parallel to this development, Qatar is looking to import talent by giving star athletes citizenship and including sport in the education curriculum to help develop local stars.

“A key challenge for Qatar is to improve the performance of Qatari sportsmen and sportswomen at regional and international championships,” according to the QNDS 2011-16. “National sporting heroes can inspire Qatari youth to participate in sporting activities and motivate them to adopt a healthy and productive lifestyle in pursuit of their dreams.”

While the world’s media has rightfully taken Qatar to task for its treatment of labour workers, it must also appreciate the country’s aspiration to host the world’s most watched sporting event.