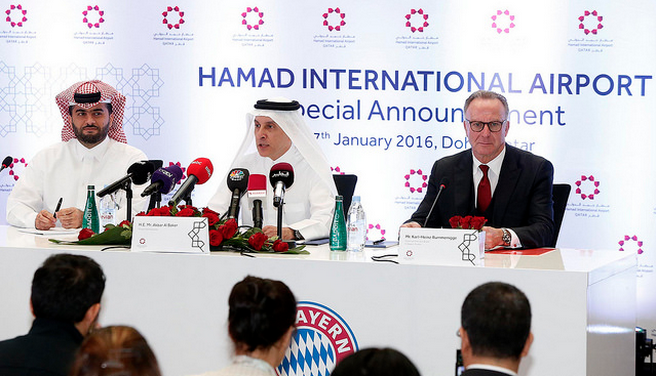 The company said the move was part of Qatar’s national vision to establish global leadership in sports in the buildup to its hosting of the 2022 FIFA World Cup.

“This is perfectly aligned with our national strategy to establish global leadership in sports, by hosting world-class events such as the recent ATP Qatar ExxonMobil Open and the International Paralympic Committee World Championships,” said Al Baker.

“To further align the group to this national strategy, we took a creative approach by seeking opportunities for HIA-Qatar to partner with the best of the best, and very happily we have created a Platinum Sponsorship relationship with Germany’s most-winning team, FC Bayern Munich. We welcome the opportunities this relationship gives HIA-Qatar.”

No details were given as to what exactly the deal, which begins in the 2016/2017 football season, will involve but HIA said it would lead to “various joint ventures” over the coming years allowing passengers to engage with the team.

The move follows Qatar Airways’ controversial sponsorship of Spanish football club FC Barcelona, which began in the 2013/2014 season. Talks for a new deal, worth 65m euros a year, were reported to have stalled in October.

Qatar has also been forced to deny allegations of corruption in its winning of the FIFA 2022 tournament. Investigations into the football governing body by Swiss and United States authorities are still ongoing.