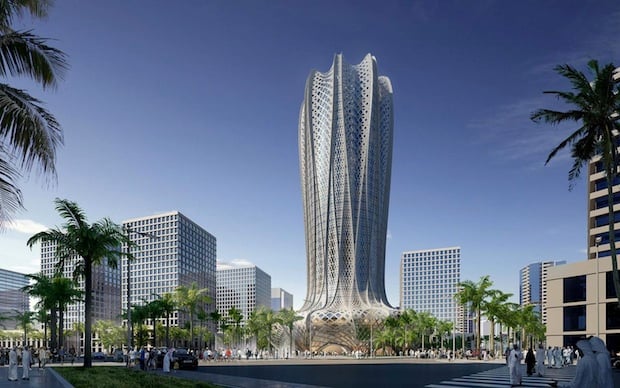 Qatar will construct two buildings designed by late Iraqi-British architect Zaha Hadid, including a tower shaped like a desert flower close to the site of the 2022 soccer World Cup final, a member of its ruling family said on Tuesday.

Sheikh Mohammed bin Hamad al-Thani, the brother of Qatar’s Emir, commissioned Hadid in 2013 to create the structures, one a 38-story hotel in the form of a hyacinth and featuring a nine-pointed base to shield visitors from the searing Gulf sun.

Sheikh Mohammed’s Al Alfia Holding said in a statement it would construct the tower “designed in response to current and future environmental challenges” by 2020 in the city of Lusail, 23 km (14 miles) north of the capital Doha.

“We often look at nature’s systems when we work to create environments, at her unrivaled logic and coherence,” Hadid, who died in March, said of the project.

Now led by Patrik Schumacher, Hadid’s architecture firm ZHA has announced a number of new projects including a new central business district for Prague and a technology park near Moscow.

In April, the firm said it would complete 36 projects that had been started or were under contract before Hadid’s death including an “oyster-like” ferry terminal in Salerno, Italy, the King Abdullah Petroleum Studies and Research Center in Riyadh, and the Mathematics Gallery at London’s Science Museum.