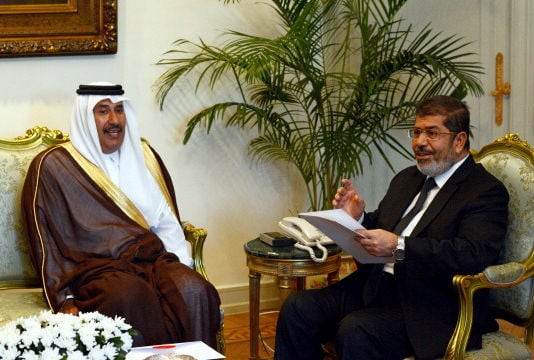 “We reached an agreement to add more bonds from the Qatari government in the amount of $3 billion. During the coming days, we will discuss the details of issuing those bonds,” Sheikh Hamad told a joint news conference with Egyptian Prime Minister Hisham Kandil.

Sheikh Hamad said Qatar would supply natural gas to Egypt in the summer when it was needed. “We also discussed projects that we agreed on four or five years ago, especially in iron and steel,” he said.

Qatar did not ask Egypt for anything in return for its latest aid, Sheikh Hamad added.

But there have been signs of disagreement in recent months; for example, Egypt’s financial regulator is holding up a proposed joint venture between QInvest, majority owned by Qatar Islamic Bank, and Egypt’s EFG Hermes, a leading Middle East investment bank.

Kandil told the news conference that Egypt’s relations with Qatar were fine and that media reports of tensions were wrong. The two leaders did not mention the QInvest deal during their appearance.