Qatar, Saudi Arabia and Kuwait rank among the top 10 countries worldwide that are most likely to see strong growth in luxury spending by ultra-wealthy residents or visitors, according to a new report.

Qatar, Saudi Arabia and Kuwait performed especially well on the basis of their wealthy populations’ propensity to spend on imported luxury goods and healthy appetite for premium travel, the report found.

The UK topped the list due to significant amounts of spending by the very wealthy, particularly in London, and the relative strength of the country’s economy.

Over £8 billion of goods are now sold by luxury brands each year in the UK, according to Ledbury Research’s estimates.

China, despite a dip in its predicted economic growth and government anti-graft measures that have affected luxury demand, came second.

The Chinese are already the single biggest consumers of luxury goods, accounting for almost 30 per cent of global spend, the report said.

The index was prepared for the annual Wealth Report released by Knight Frank on Thursday.

Andrew Shirley, Wealth Report editor, said: “The results of this new index are fascinating and it will be particularly interesting to see how the rankings change next year in light of falling oil prices and other economic shifts.” 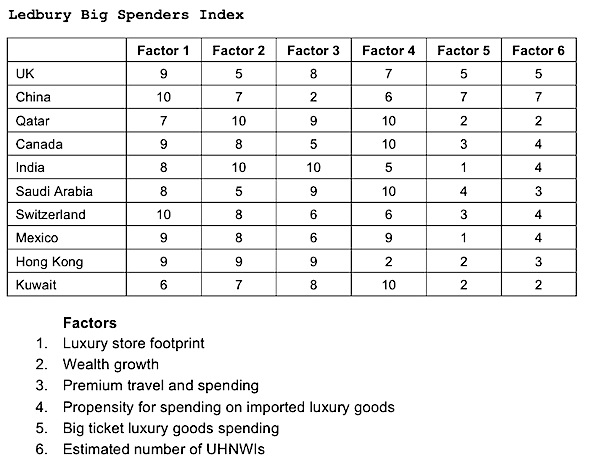 Some 5,181 people saw their wealth cross the $30 million mark, while 53 individuals became billionaires in 2014, taking the world’s total billionaire population to 1,844.

Europe has the highest number of UHNWIs, followed by North America and Asia, the report found.

The UAE city is also expected to retain its position as one of the most important cities to UHNWIs in 2025.

Liam Bailey, Global head of research at Knight Frank, said: “Our Global Cities Survey covers those cities where the wealthy congregate, work, invest, are educated and spend their leisure time.

“London and New York will vie for top spot over the next decade with New York being the final winner in 2025 and Asian cities becoming increasingly important over Europe.”