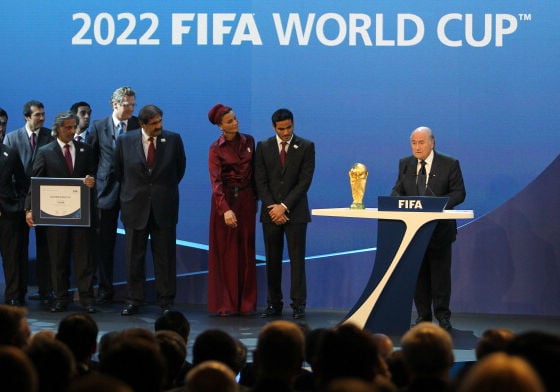 Qatar unveiled plans on Monday to build a $5.5 billion island off the coast of Doha with floating hotels to house soccer fans expected to flock to the country for the World Cup in 2022.

The hotels would be able to house as many as 25,000 soccer fans, Barwa’s chief executive Abdulla al-Subaie said at the sidelines of a real estate conference in Doha.

Demand for residences and hotel rooms are expected to increase in the tiny Gulf Arab state as projects for the 2022 World Cup tournament come onstream.

Qatar, the world’s top liquefied natural gas exporter, has allocated 40 per cent of its budget to 2016 to infrastructure projects.

“We anticipate that there will be a short-term demand for hotel rooms, so maybe it is not wise to offer all these hotel rooms for only a short time,” Subaie said.

“Oryx Island can accommodate 20,000 to 25,000 people. Cruise ships can be docked for one week, two weeks. It can be mobilized and demobilized for a short time.”

Oryx Island will cost 20 billion riyals ($5.5 billion) to build, he said, adding that the project was only in the conceptual phase.

Subaie said the company had agreed to sell one million square meters of land to Qatar’s 2022 Supreme Committee to build Lusail Stadium, where the closing match of the tournament will take place. A price has not been agreed upon, he said.

Barwa, the Gulf state’s largest listed property developer, has properties in France, Switzerland and the United Kingdom and focuses on retail, office, hospitality and residential developments.

Last year it announced plans to launch a $4.9 billion mixed-use Golf City project in its coastal Lusail city development, which will house 4,000 residential units and a golf course.

The company has no plans to issue any bonds this year, he added.