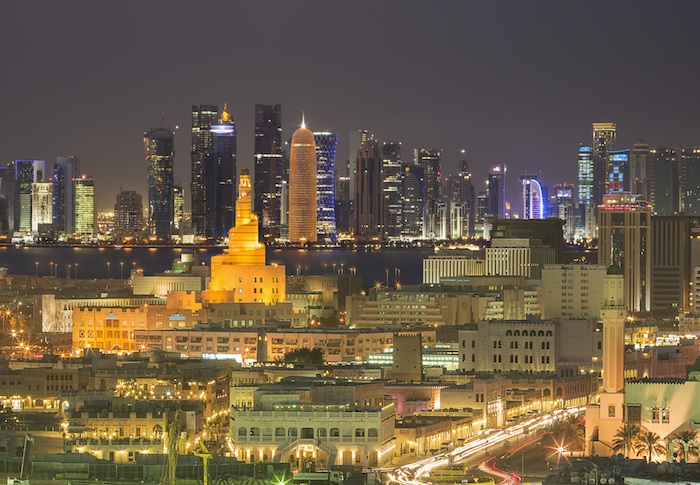 Qatar in recent decades has transformed itself from a tiny, fragile emirate into a global powerhouse with one of the world’s highest per capita incomes, at $100,000 in 2012. This is largely a reflection of the Gulf state’s gas exports, which comprise almost a third of the world’s supply of Liquefied Natural Gas (LNG) and form much of Qatar’s economy.

The emirate’s position as the largest single exporter of LNG allowed it to post double-digit economic growth for several consecutive years, at a time when many Western nations were reeling from the impact of the credit crisis.

Indications that Qatar’s decades- long gas boom is slowing have raised questions over future growth in an economy where oil and gas receipts drive more than half of gross domestic product (GDP). Economic growth decelerated to 6.2 per cent in 2012 from 17 per cent in 2010, according to a May 2013 report by Qatar National Bank. A Citigroup note cited by Bloomberg in June estimates Qatar’s budget surplus – booked at QR54.3 billion in the 2011 to 2012 fiscal year – could turn to a modest deficit by 2015.

The Gulf state is forecast to see 5.3 per cent economic growth in 2013, its General Secretariat for Development Planning, (GSDP) said in June. This marks an increase from its previous estimate of 4.8 per cent, but still reflects the weakest rate in a decade.

The GSDP expects growth of 4.5 per cent in 2014, which remains ahead of what many developed economies are likely to deliver.

For the private sector, much weighs on the massive infrastructure overhaul set to take place ahead of hosting the 2022 FIFA World Cup. Doha plans to invest more than $180 billion on projects including air-conditioned stadiums, a $35 billion rail and metro network, new roads and power plants and a network of new hotels. The spending spree will help the non-oil economy expand by as much as 16 per cent year from 2015 to 2018, EFG-Hermes said in May.

The scale of the expected spending in such a small country has, however, raised the spectre of high inflation and an overheated economy, particularly as 2022 draws nearer. Qatar in 2008 saw inflation jump to more than 15 per cent, in part because of the building blitz that accompanied the hosting of the Asian Games two years earlier. Early signs of a rise are in play. Consumer price inflation averaged around 3.6 per cent in 2013, according to the GSDP, up from 1.9 per cent in 2012.

Qatar is holder of the world’s third-largest gas reserves and 1.4 per cent of the world’s oil, with the majority of its LNG exports generated from the vast North Field it shares with Iran. The Gulf state has become one of the world’s richest nations by selling gas to Europe, Asia and the Americas, overtaking Indonesia as the largest LNG exporter in 2006. Hydrocarbons play a crucial role in the OPEC member’s economy, accounting for around 57 per cent of its GDP in 2012.

Qatar’s crude oil production was estimated to be around 733,668 barrels per day in 2012, according to the Joint Organisations Data Initiative, which ranked the emirate as the world’s sixteenth biggest crude exporter. About half of the Gulf state’s crude oil is generated from the onshore Dukhan and Al-Shaheen fields.

Qatar’s LNG sector had a robust 2012, with production rising 7.8 per cent on the previous year to 157 billion cubic metres (bcm), according to UK energy major BP. Average global price (CIF Japan) jumped to a record $16.75 per million BTUs, a standard measure for commercial gas sales, compared with $14.73 per million BTUs in 2011. The country’s LNG exports rose five per cent to 105.4 bcm during the 12-month period, BP data shows, with Japan, India and South Korea among the largest buyers of Qatari LNG.

Qatar’s rapid growth in the field of LNG was the result of a vast expansion of its gas-exporting infrastructure. This ended in 2010, when the city-state’s export capacity hit the targeted 77 million tonnes a year, just 14 years after shipping its first cargo. With the conclusion of the expansion programme, and as oil yields decline worldwide, economic growth is now expected to slow. The challenge going forward for Qatar’s government will be to spur continuing growth in the non-oil sector.

Qatar is geographically tiny and has a population of just 1.9 million people. Less than 15 per cent of the population is comprised of local citizens, with the remainder largely made up of blue-collar workers from South Asia, the Philippines and other Middle Eastern countries.

Qatar, like other Gulf oil exporters, avoided the social unrest that rocked Libya, Egypt, and other Arab states, thanks in part to its expansive social welfare system. Citizens benefit from a cradle-to-grave welfare system that offers free healthcare and education, housing loans and subsidised utilities, at a cost of billions of dollars to the state each year. The country’s unemployment rate is estimated at less than one per cent.

State spending increased in the wake of the 2010 to 2011 uprisings, with Qatar raising basic salaries and social benefits for state employees by 60 per cent. Military staff netted between 50 per cent and 120 per cent increases, as the emirate sought to insulate itself against the wind of political change blowing across the region.

As in other GCC states that lack organised political opposition, this expansionary policy was paired with a sharp approach to any rumblings of discontent. Muhammad al-Ajami, a poet, was sentenced in 2011 to life imprisonment for allegedly “inciting the overthrow of the regime”. The sentence was later reduced to a 15-year jail term.

Of late, it is Qatar’s expatriate population that has caught the global spotlight. The emirate’s successful bid to host the 2022 World Cup has been accompanied by increased scrutiny of alleged labour rights abuses of construction workers. Doha made headlines in September when the UK’s Guardian newspaper reported that dozens of Nepalese labourers had died on unsafe Qatari building sites over the summer. Nepal’s ambassador to Qatar was quoted as describing the country as an “open jail” for Nepalese. A separate report by the International Trade Union Confederation claimed Qatar’s World Cup construction frenzy could cost the lives of at least 4,000 migrant workers before the first game begins. The Qatar government has denied reports of widespread abuses, but also pledged to increase site inspections and take a tougher line on labour infringements.

Doha has also faced outside criticism over its kafala system of sponsorship for foreign workers. The scheme binds labourers tightly to their sponsors, requiring them to secure exit visas to leave the county and permission to change jobs. It has been attacked by rights groups who argue it exploits vulnerable workers, and gives rise to slave-like conditions. Past efforts to reform the system have failed, and it remains to be seen whether Qatar will follow Bahrain’s lead and scrap sponsorship completely.

Qatar’s one-family absolute monarchy has ruled over the emirate for more than 100 years. In June last year, Emir Sheikh Hamad bin Khalifa Al Thani handed power to his son, telling the nation the moment had come to usher in a new era of leadership.

“The time has come to turn a new page in our country’s journey and see a new generation assume responsibility,” the Emir, who himself took the title from his father in a 1995 bloodless coup, said in a broadcast speech.

In a speech to the nation shortly after his appointment, Sheikh Tamim said he would continue to follow the “path” laid out by his father. On matters of foreign policy, he said his country “rejects divisions in Arab societies on sectarian lines”, leading some analysts to suggest he may move to soften Qatar’s interventionist approach.

Sheikh Tamim inherits a country that has morphed itself from a small Gulf peninsular into a regional leader, whose political clout stretches far beyond its own borders. In recent years, Qatar has bankrolled and armed rebels in Syria, sent fighter jets to join the NATO campaign against Gaddafi in 2011, and backed Hamas in Gaza. The government has also invested billions of dollars in supporting Egypt during the recent political turmoil, part of wider efforts to protect its interests and forge new alliances in an unstable region. By successfully parlaying its gas wealth, the city-state has moved to compete for influence with long-time power players Saudi Arabia and the UAE.

The founding of Al Jazeera in 1996, the Doha-based news network that now operates worldwide, was seen as a further boost to the emirate’s global ambitions.

Qatar has also used its financial muscle to bolster its profile overseas, snapping up multibillion-dollar investments in trophy companies such as Barclays, London’s Harrods department store, Credit Suisse Group and Volkswagen, Europe’s biggest carmaker. Many of these strategic investments were carried out through Doha’s sovereign wealth fund, the Qatar Investment Authority, whose portfolio operates in part as a hedge against sliding gas prices.

In 2012, the fund was valued at $135 billion by the Sovereign Investment Lab at Bocconi University in Milan. In the UK alone, Qatar is estimated to have spent some $33 billion over the past six years on a range of assets.

Closer to home, Doha’s priority is the diversification of its economy away from hydrocarbons, and the continued growth of its private sector. The government has invested billions of dollars in finance, trade and tourism, in a bid to build a sustainable knowledge economy and attract global business. The success of this policy will be crucial to safeguarding Qatar’s future as gas reserves dwindle.