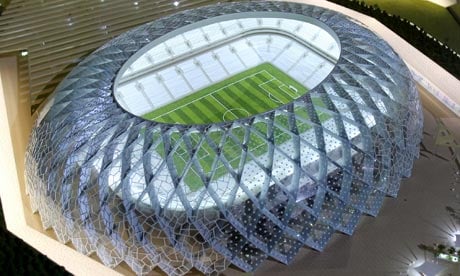 Qatar has appointed the lead project manager and design consultant for the first of its World Cup 2022 stadiums, the committee managing preparations for the event said on Thursday.

Regional project management and consulting firm KEO International has been appointed project manager and Los Angeles-based Aecom Technology Corp was named as design consultant for the al-Wakrah Stadium, the Qatar 2022 Supreme Committee said in a statement.

Qatar, where summer temperatures top 45 degrees celsius, was the surprise winner of a FIFA vote in 2010 to choose the 2022 host country. The tiny Gulf state plans to build solar-powered, air-conditioned stadiums to overcome the sweltering summer heat as well as housing, infrastructure and transport for the event.

The top tiers of the planned 45,000-seat stadium will be modular and, following the tournament, the capacity of the stadium will be reduced to 20,000, with the remaining 25,000 seats removed, donated and re-constructed in countries that need sporting infrastructure, the statement said.

“This is an important step for us as we deliver on our innovative hosting concept,” Hassan al-Thawadi, Secretary General for the Qatar 2022 Supreme Committee, said in the statement.

“In the coming months, we will also bring on board a project manager and design consultant for Al Rayyan Stadium.”

No financial details of the contract was provided.