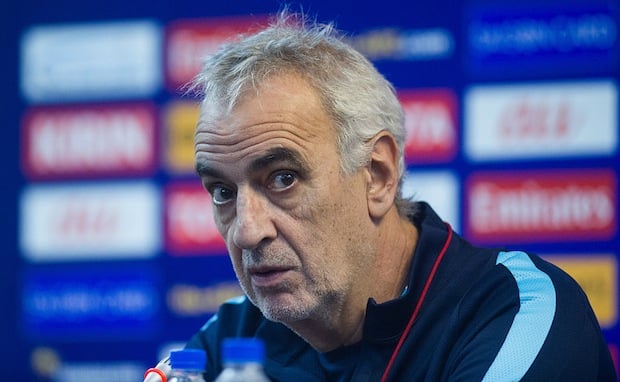 The coach of Qatar’s national soccer team has threatened to resign if a plan being considered by the country’s football authority (QFA) to exclude naturalised players from the squad is implemented.

Qatar has used its immense oil and gas wealth to recruit sportspeople from around the world to bolster its national team, part of an ambitious vault onto the world sporting stage by the wealthy Arab state which will host the soccer World Cup in 2022.

Jorge Fossati told local media on Wednesday that a plan by the QFA to reduce the number of foreign-born players could damage Qatar’s chances of qualifying for its first World Cup finals in Russia in 2018.

“I heard about a plan to exclude naturalised players and bring in more young Qatari players into the national team. It (discouraging naturalisation) is one point I don’t agree with at this stage,” Fossati told Doha Stadium Plus, an English-language sports weekly.

Fossati, who was hired by Qatar in September, said that if the federation went ahead with the plan he would quit.

“If the federation wants to go another way, I’ll respect its decision 100 per cent. And it’ll be better for the Qatar national team to have another coach who supports that view.”

About half of Qatar’s national team are naturalised citizens, including Rodrigo Tabata of Brazil and Uruguay’s Sebastian Soria. In a match against China on Nov. 15 six players in the starting 11 were naturalised.

But Doha has also said it wants to foster local interest in sport among its roughly 300,000 citizens and to field a homegrown squad when it hosts the 2022 tournament.

World soccer’s governing body FIFA rules state that a player must have lived in a country continuously for five years after the age of 18 before representing the national side.

Qatar has won one out of five qualifying matches for the Russia World Cup finals and its next match will be on March 23 against Iran. It faces the possibility of becoming the only nation apart from Italy in 1934 to host a World Cup without having previously competed in the finals.