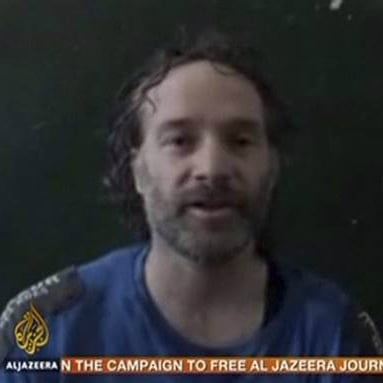 Al Qaeda-linked militants in Syria on Sunday freed an American writer missing since 2012 following what officials said were efforts by the Gulf Arab state of Qatar to win his release.

U.S. Secretary of State John Kerry said in a statement that Peter Theo Curtis had been held by Nusra Front, al Qaeda’s official wing in Syria whose rivalry with militant group Islamic State has fueled war among the insurgents themselves.

President Barack Obama, who was briefed on Curtis’ release, “shares in the joy and relief that we all feel now that Theo is out of Syria and safe,” the White House said.

“But we continue to hold in our thoughts and prayers the Americans who remain in captivity in Syria – and we will continue to use all of the tools at our disposal to see that the remaining American hostages are freed,” the statement added.

News of Curtis’ release emerged just days after the Islamic State group posted a video on the internet showing one of its fighters beheading American journalist James Foley, who was kidnapped in Syria in 2012.

The United Nations said in a statement “it can confirm that it facilitated the handover of Peter Theo Curtis. He was handed over to UN peacekeepers in Al Rafid village, Quneitra, the Golan Heights, at 6:40 p.m. (local time) on 24 August 2014. After receiving a medical check-up, Mr. Curtis was handed over to representatives of his government.”

A senior U.N. official said the negotiations for Curtis’ release were handled by the Qataris.

White House national security adviser Susan Rice said in a statement that Curtis, 45, was “safe outside of Syria, and we expect he will be reunited with his family shortly.”

Curtis is an author and journalist who published books under the name Theo Padnos. His family said in a statement that he changed his name legally to Peter Theo Curtis after he published a memoir called “Undercover Muslim: A Journey into Yemen.” The name change was to make it easier to travel in the Muslim world, the family said.

The family said it was “deeply grateful to the governments of the United States and Qatar and to the many individuals, private and public, who helped negotiate the release of our son, brother and cousin.”

“My heart is full at the extraordinary, dedicated, incredible people, too many to name individually, who have become my friends and have tirelessly helped us over these many months,” said Curtis’ mother, Nancy Curtis, of Cambridge, Massachusetts. “Please know that we will be eternally grateful.”

The statement added that while the family was “not privy to the exact terms that were negotiated, we were repeatedly told by representatives of the Qatari government that they were mediating for Theo’s release on a humanitarian basis without the payment of money.”

“We are also deeply saddened by the terrible, unjustified killing last week of (Curtis’) fellow journalist, Jim Foley,” the family said, appealing for the release of other hostages.

Curtis, who has a PhD in comparative literature from the University of Massachusetts, and is fluent in Arabic and French, wrote his first book about the frustrations of teaching literature to incarcerated teenagers in Vermont.

He later became fascinated with another type of troubled youth: Western men who converted to extremist Islamist causes.

After moving to Yemen to work for a newspaper there, he studied at religious schools, madrassas, along with disaffected young men from the United States and Europe.

In a 2010 interview with the GlobalPost online news publication, Curtis said: “These kids turn up in Yemen with no cash. They are so lonely. The mosque gives them a house, money, education – and love. And in exchange for that, the kids give loyalty.”

Another American, photographer Matt Schrier, who was held in the same cell as Curtis but escaped in 2013, said in a statement: “This day will go down as one of the happiest of my life. After living through the tragic events of this past week with the death of James Foley and hearing that the life of Theo Curtis has been spared, it gives me great hope for the safe return of all the other hostages.”

The U.S.-based Committee to Protect Journalists also welcomed the release of Curtis “after nearly two years of harrowing captivity in Syria.” It estimates that about 20 journalists are missing in Syria. Many of them are believed to be held by Islamic State.